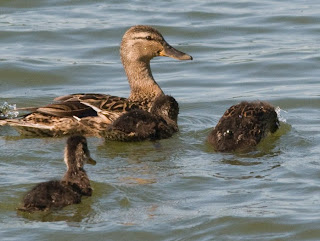 Two visits to Brandon this week came up trumps on Tuesday with the first recorded siting of a Gadwall with young since the late 70's! This was in addition to the 3 Teal chicks located last week, which was another rare site at Brandon over recent years.

On a thoroughly wet and miserable Tuesday, (21st July), when the whole morning was spent in the Main-Hide, the highlight of the day was the discovery of our 3 Gadwall chicks. It's days like this when we discover who the fair weather birders are and I'm delighted to say that the usual Tuesday crew all made the effort. Although some arrived slightly later than normal!!

Thursday (23rd July) was work party day and this week we took the opportunity to make another check of the artificial Sand Martin structure, which has now yielded nearly 50 chicks, a major result for the reserve. A respite in the heavy showers also enabled the team to complete the weather proofing of the River, Teal and Main Hides. During the course of today I was also lucky enough to come across a pair of Grass Snake which were sheltering under a section of tarpaulin.
The quiet period continues in relation to irregular visitors to the reserve with only a few sightings of Green and Common Sandpiper over the past week, the latter of which I observed from the Teal hide after work today.
Posted by boatbirder at 22:11 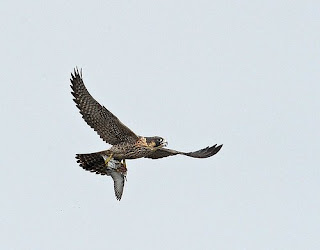 A rest from blogging recently to concentrate on other commitments but several visits to Brandon over the period, culminating in a six hour stint yesterday morning.
During the breeding season and with few migrants about Brandon has entered a period of relative calm, although the few oddities which have travelled through have naturally been missed by yours truly! This has included a visit by four Little Egret on East Marsh Pool and two Black Tailed Godwit on the same day.
Nevertheless while the birding front remains somewhat static there's always other species to keep you company. During a visit on Tuesday July 30th myself and JR joined one of the regular photographers at Brandon Jeff Rankin who had reported a number of Marbled White butterfly in one of the meadows and after eventually viewing several this was another first for me at Brandon.
On work party day, Thursday July 7th, 2 male Pochard dropped in for a short stay plus a lone female Shelduck on River Pool, a couple of Water Rail with 2 chicks and 3 broods of Tufted duck (5+3+6). This was also probably the last day I will encounter a Cuckoo for this year at the Marsh as they are about to begin their journey south.
Tuesday July 14th began as another quiet birding day but this was easily remedied by a visit to Horstail Glade Junction. This is where the path through to West Marsh Hide meets the entrance into Horstail and is an excellent area for Butterfly. Here we picked up an amazing 10 species in just a 10 minute period! These included Red Admiral, Holly Blue, Small Tortoiseshell, Meadow Brown, Green Vein, Peacock, Comma, Large Skipper, Gatekeeper and Small White. In the mid afternoon at East Marsh Pool, and unfortunately just after JR and TJ's departure, myself and PB were treated to a Peregrine (Library Picture) which, putting everything up and into a frenzy was carrying a large amount of prey, possibly a Pigeon!
So to yesterdays visit and a good 6-hour session, highlights being Common and Green Sandpiper, Hobby, Kingfisher, 6 Oystercatcher, Little and Ringed Plover, Redshank, Little Egret at Carlton Hide and a rarity for Brandon in the form of Teal with 3 young. We were also delighted to see a pair of Water Rail with 2 young passing quite often in front of the newly strimmed Main Hide. Not bad for a quiet period eh!!
A brief paragraph on the home front with 2 Red Kite over the Marina on the 15th, a number of juvenile Sedge and Reed Warbler, Reed Bunting and Moorhen also being seen. Marbled White butterfly are also on the top field and Buzzard & Kestrel are also nesting within site of the moorings.
Posted by boatbirder at 09:03