Following Saturday's visit to Guadalhorce Dave and I decided to have a short walk around Zapata on the Sunday (never bird in Spain on a Sunday if you can avoid it), followed by a trip out to Laguna Fuente de Piedra on Monday.

My remaining time of this short break in Spain was spent exploring Zapata, which despite being devastated by the recent rains still continues to produce. Zapata was a real find for me a few years back, thanks to Barbara and Derek Etherton from the Adalusia Bird Society and a great place for seeking out Red-necked Nightjars in the spring and summer. Only 20-minutes drive from the villa this extraordinary habitat runs alongside the Rio Guadalhorce to the north-west fringes of Malaga Airport (basically the opposite side to the reserve at Guadalhorce) it consists of scrubland, scrape, small pines and bushes along with large reedbeds and a ford. Normally you can off road but with the tracks either flooded or washed away I chose to park up in the village and walk, in fact you probably see more that way!

Firstly though, Laguna Fuente de Piedra on Monday, the largest in Andalusia at 1,400 ha and best known for it's breeding Greater Flamingos. Unlike Zapata, the lagoon has benefited from the recent rains, including the surrounding pools. Here, the highlight had to be a wintering and very sad looking Woodchat Shrike, which by rights should now be in sub-Saharan Africa, although a handful of winter records are listed in 'Birds of Iberia'.

It was a blustery day and most species on the lagoon were way off in the middle, with the remaining Flamingos even further away feeding in the shallows. From the Mirador we could make out a group of over 40 Black-necked Grebes, along with many Pochard and Shoveler. Most of the waders have moved out to their wintering grounds but we managed a number of Black-winged Stilts and a couple of Greenshank.

A drive around the perimeter of the lagoon held our target birds for the day, wintering Common Cranes feeding in the nearby fields, one field producing (5) Stone Curlews, also wintering here.

Back to Zapata and the remainder of my visits were spent in glorious autumnal sunshine, with temperatures up to 20C and almost exclusively alone. Just walking the paths and tracks produced what seemed to be birds in every tree, bush, reed or track. Black Redstarts, Common Stonechats, Chiffchaff, Serin, and Zitting Cisticola seemed abundant and both White Wagtail and Crested Lark constant companions with Blackcaps in full song and Sardinian Warblers always present but elusive, this despite the never-ending flow of airliners landing just a short distance away! Also of note the many Painted Ladies, Clouded Yellows and other butterflies still on the wing, which sadly I didn't take time to explore.

The river held Greenshank, Common and Green Sandpiper, along with Grey Heron, Cattle and Little Egret.

A couple of Marsh Harriers seemed permanently on the go, this along with Common Kestrel, the occasional Booted Eagle, another wintering species and passing Osprey, one or two also winter here. At this time of year Crag Martins come down from the mountains and every so often one or two would pass through.

The extensive reedbeds which run along the old river course held large flocks of Common Waxbill, many Chiffchaffs, a number of Cetti's Warbler and up to four Bluethroats during one visit.

A real surprise came during Tuesday's visit when I came across a Wryneck, which having been foraging out in the open decided to head for the rocks as I raised the camera. I've included below the worst ever record shot of a Wryneck you'll ever see! Apparently, according to local birders, one winters here each year and this may well have been the first record this autumn.

Having only heard one thus far, on Wednesday, my final full day I decided to just to sit tight close to a section of reedmace in the hope of catching a glimpse of another wintering species, Penduline Tit. It was hard work but after studying every movement for over an hour I finally caught sight of a single bird feeding. Unfortunately, the best image I could manage of this very flighty individual was the back end. Still a great end to a superb short break and luckily I'll be back here, this time with my wife Dazza for Christmas and New Year.

More Images of the Visit....

🇪🇸☀️ 20C Saturday 24th November 2018 ~ Arrived in Spain for a short stay with my buddy Dave in Mijas last night and enjoyed an excellent day today at one of my favourite local reserves.

Guadalhorce, just a short drive from the villa and adjacent to the busy Malaga airport, gravel and sand extraction have created several large artificial ponds and scrubland. Coupled with the fact that the Guadalhorce river estuary is on one of the main Mediterranean-crossing routes between Europe and Africa. You can never be quiet sure what you are going to see during each visit.

After recent heavy rains, today was glorious with a light breeze, beautiful blue skies and a temperature of around 20C. We arrived around 9am and completed a tour of the reserve visiting the four hides and also covering the stretch which runs along the beach. Parking at the local church and walking down to the bridge crossing several Black Redstarts could be seen perched on the fences, Monk Parakeets were their usual marauding selves, two White Wagtail on the track and the scrubland running alongside the river held Chiffchaff, Sardinian Warbler and two Zitting Cisticola (Fantail Warblers), Cetti's Warbler was also heard.

Overhead several wintering Crag Martins, along with a few Barn Swallows and then the first Raptor, this one a Booted Eagle, two in total today along with a dark phase morph! An Osprey passed at distance, and during the visit (2) Marsh Harriers, (3) Kestrels and a Common Buzzard were also noted. 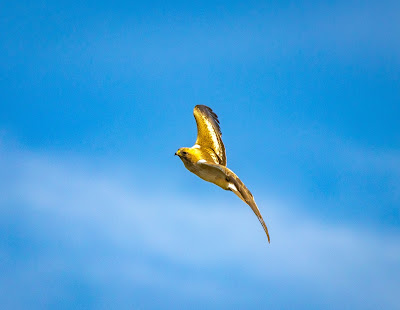 The hides at Laguna de la Casilla and del Rio Viejo were generally quiet, save for a single Pochard several Coots and (2) Little Grebes but the surrounding scrub seemed alive with more Chiffchaffs, Sardinian Warblers, Greenfinches a couple of Serin, Blackcap singing, at least (4) Stonechat and a single juvenile Bluethroat. (3) Hoopoes, (4) Crested Larks and (5) Meadow Pipits before we arrived at the Rio Viejo (the old river).

Here there were (4) Avocets and a dozen Black-winged Stilt, but the recent rain had taken away a lot of the wader scrape so nothing further could be found of interest. At the de Aves Marinas sea-watch area there were 1000s of Gulls on the sea but the low sun and distance made observation almost impossible.

I took the beach walk past the fenced restricted nesting areas, obviously deserted at this time of year and the beach had plenty of debris washed out from the rivers after the heavy rains, thankfully with very little plastic to be seen!

Our final stop was at the Laguna Grande hide, this is where the bulk of the waterfowl seemed to be hanging out. Good numbers of Pochard, Shoveler, plus a single White-headed Duck and an amazing count of (18) Black-necked Grebes. Two Greater Flamingo plus (5) resting Greenshank and the usual collection of Black-winged Stilts. Many Cormorants and Grey Heron were roosting, along with the odd Little Egret mingled in and there were several large flocks of mixed Spotless/Eurasian Starlings.

After our visits to RSPB Loch of Strathsbeg and the Southern Highlands at Glenshee, we spent the remainder of our week in Scotland working our way along the north-east coast.

There are lots of bays and beaches to explore working up from our accommodation at Cruden Bay as far as Rosehearty on the Moray Firth coastline. However, Cruden Bay itself has been productive, with Dippers on the river and lots of Yellowhammers and Tree Sparrows, which appear to be in good numbers right across the area.


On Thursday Dazza was meeting an old friend in Aberdeen for lunch after which we spent time at Girdleness, which is the headland that protects the southern side of the harbour. The short walk around it takes in the lighthouse, sea views and Torry Battery - built to defend the harbour in 1860.

On Friday, our final full day we managed to get as far along as Rosehearty, just four miles west of Fraserburgh, where we spent time in both places checking out the harbours, bays and beaches.


Fraserburgh produced the only two Waxwings of the week, despite many reports in the local areas and at Sandhaven we recorded over thirty Rock Pipits around the harbour. The weather, with the exception of Wednesday, when it rained all day, has been exceptional with mostly clear blue skies and temperatures on some days in the mid teens, incredible for November. To be honest, the weather was too good for birding, with little wind, mostly southerly and so no Skuas, Petrels, unusual sea ducks or rare Gulls to report, in fact, Divers were a little scarce too with only Red-throated seen. That said a great week, particularly for my wife Daria, who had a well-deserved break in her homeland!


A stop off on Saturday night at Lancaster on the route home gave a perfect opportunity to visit RSPB Leighton Moss, a place where I have many childhood memories. Here the highlights were good scoped views of a Great Grey Shrike, Merlin and two Cattle Egrets at a nearby farm.

Other Images of Scotland...