🎄Since my previous post, I've spent my time birding the Aberdeenshire coastline beginning just south of Stonehaven at RSPB Fowlsheugh and as far north as RSPB Loch of Strathsbeg, where I managed an unexpected year-tick Green-winged Teal yesterday afternoon (Mon 21st). Along the Ythan Estuary, all the usual common waders can be found and out to sea things are pretty settled with little movement currently apart from the odd passing Red-throated Diver, plenty of Guillemots bobbing around and the usual selection of Eider Ducks. I'm still logging small groups of Bottlenose Dolphin and plenty of Seals, both Common & Grey. During one visit to Girdleness, a Weasel ran out in front of me while driving towards the lighthouse, but thankfully I managed to avoid it.

☃️The most fascinating thing I've noticed during this period has been just how quickly things can change here along the coastline. For example, just a week ago the cliffs were almost deserted but over the past several days, there's been a large influx of Fulmars, which despite the time of year and being mostly pelagic during non-breeding months have already begun to stake out the cliff face. In fact, since moving here permanently in October, you could count the number of Fulmars I've logged during my coastal visits on one hand.
🎅Suffice to say I've spent many hours since in the company of these fascinating birds watching them hunt just barely above the waves, seemingly with little effort using their characteristic stiff wing beats. What has also been interesting has been observing the interaction between birds at rest with their throaty chuckling and cackling rising and diminishes in volume, sounding alarmed one second and companionable the next. Apparently, these birds also remain largely loyal both to partner and nesting sites and can often live up to fifty years, they are fast becoming one of my favourite sea birds!
❄️On Saturday Dazza and I had to travel to Fraserburgh to pick up a few things for Christmas and while here stopped just outside the Museum of Scottish Lighthouses to enjoy a takeaway coffee & to watch the many Shags heading off to roost. There are good views of the sea from here while sitting in the comfort of the car. However, while enjoying our coffee a slight movement in the gravel took the eye and turned out to be a Snow Bunting, a wonderful find and completely unexpected. Good job I carry my camera everywhere I go!
A Few More Images of the amazing Fulmars... 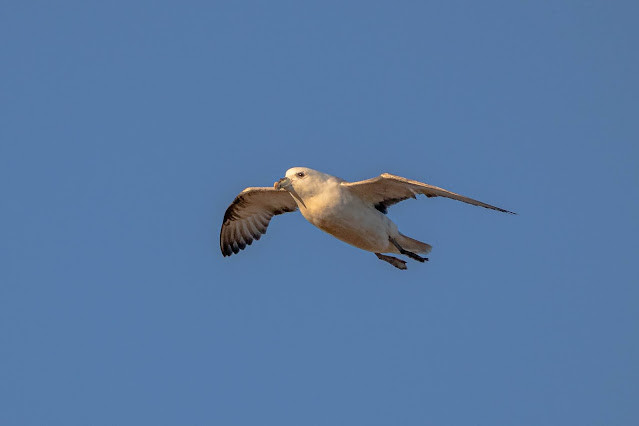 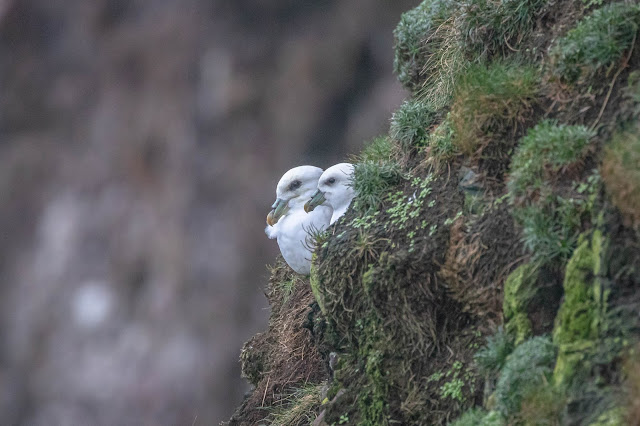 NEW Scottish Life-List Since Relocating in October 2020
Posted by boatbirder at 16:01

A bitterly cold dreich visit to Girdleness today but rewarded with my first 'white winger' Iceland Gull since making the move up to Aberdeenshire. 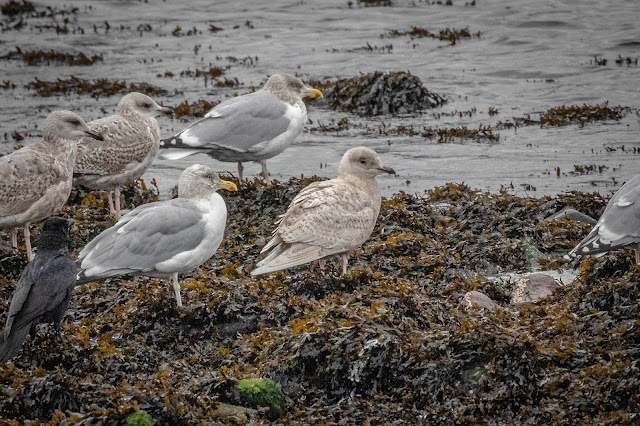 A juvenile, I think perhaps 1st winter bird was preening on the rocks just below the allotments. 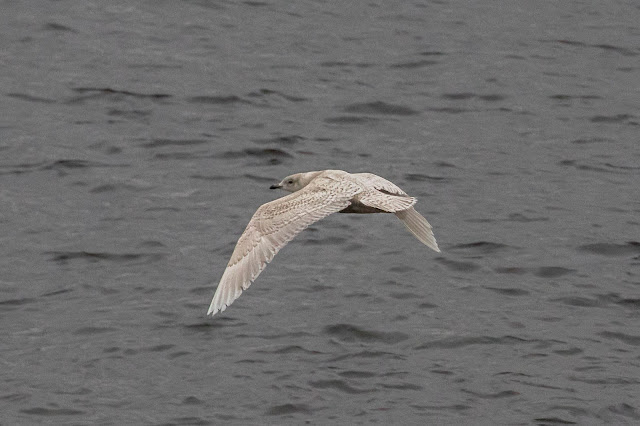 The bird stayed around for a good half hour before flying off with other gulls and lost to sight as it flew towards the harbour.

Also of note today ~ There was a short period of Dolphin activity on my arrival but unfortunately, the weather wasn't conducive to taking any decent images. I also noticed during a short Seawatch that Razorbill activity had increased with at least a half dozen birds mixed in with the Guillemots just below the lighthouse. There were also more Gannets passing through than of late but nothing unusual to report. Despite the weather, it was another enjoyable visit.

NEW Scottish Life-List Since Relocating in October 2020
Posted by boatbirder at 17:51

It was another beautiful day but before setting off to the Ythan Estuary I spent my breakfast sat at the kitchen window, camera at the ready! My aim over the last few mornings has been to capture one of the many skeins of Pink-footed Geese flying across the now gibbous setting moon, which was just sat like a gorgeous orb floating above the Bennachie hills. 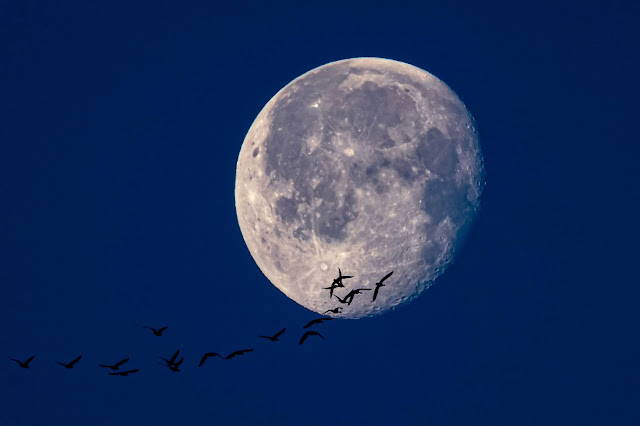 They say patience is a virtue and it finally paid off when at last one large group veered off and across the moon, a wonderful moment but all over in an instant!
The mouth of the Ythan Estuary at Newburgh on my arrival
Half an hour later I was at the Ythan Estuary once more, which was again bathed in the beautiful winter sunshine. Today I parked at Newburgh and decided to head south along the beach and then take my return journey back alongside the sand dunes. It was such a lovely day I did, in fact, spend most of it just enjoying the Estuary before heading off to the Waulkmill Hide to enjoy another magical sunset.
What follows is a pictorial of my day.. 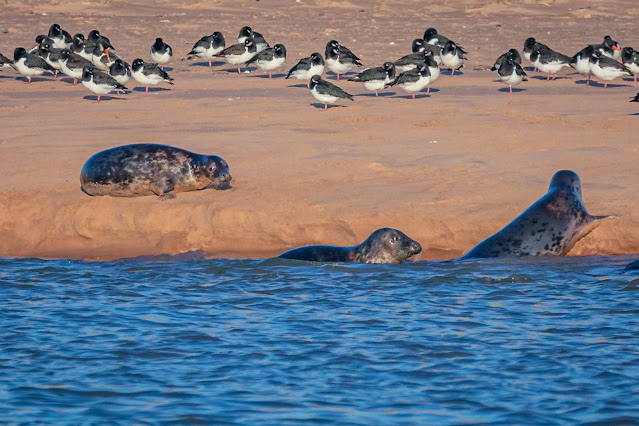 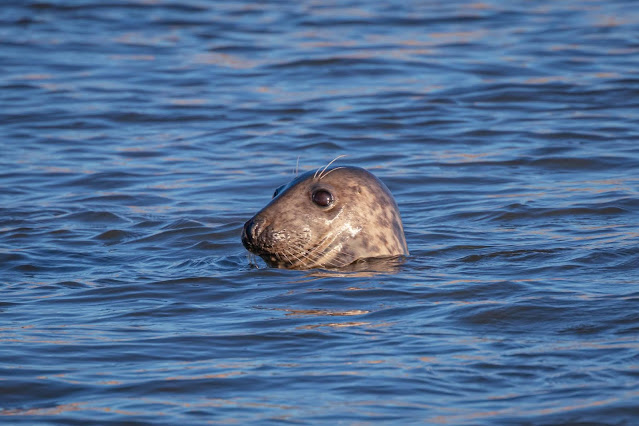 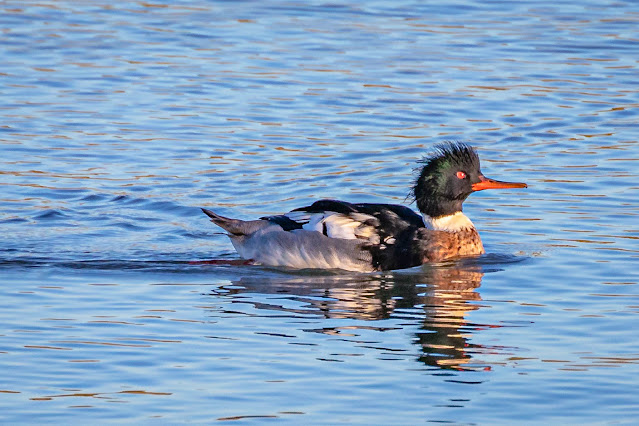 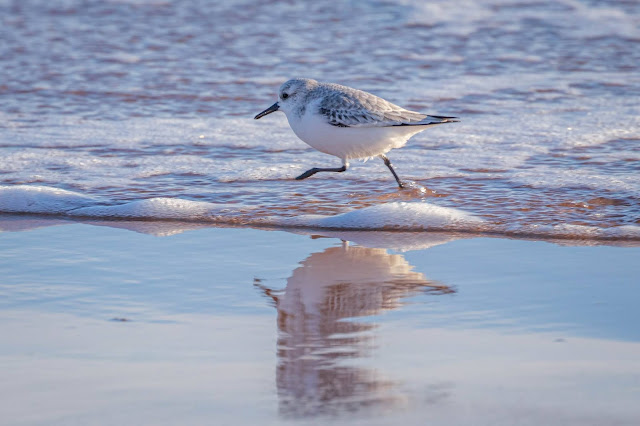 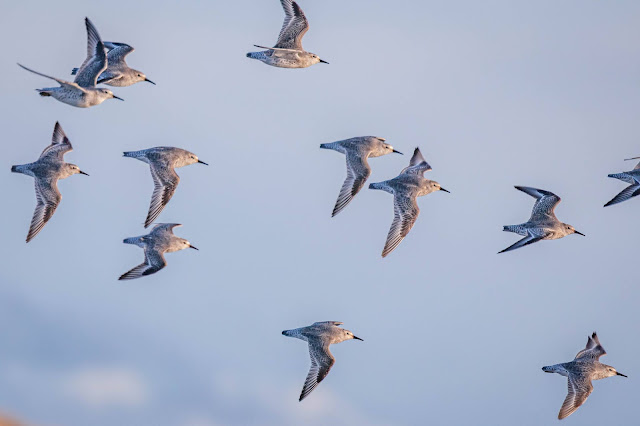 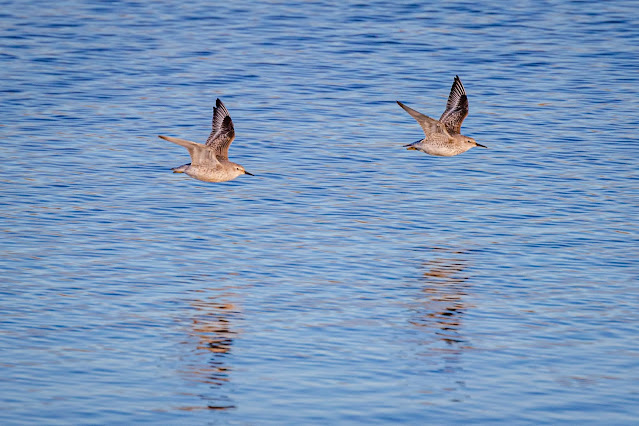 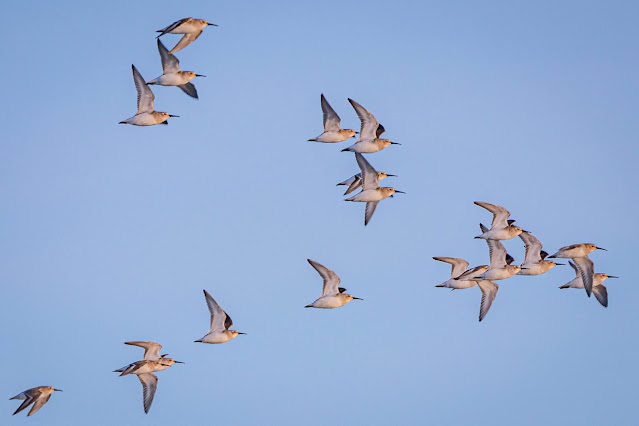 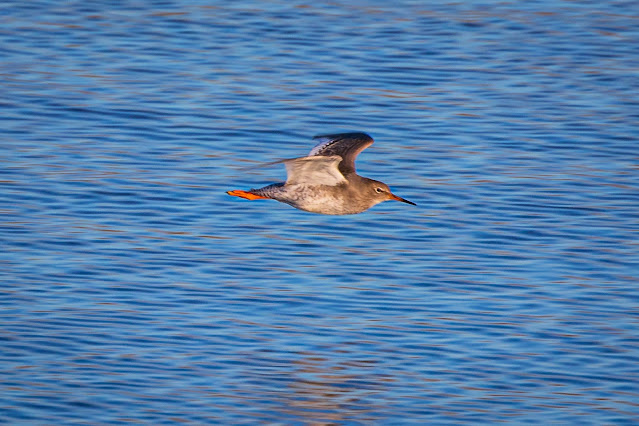 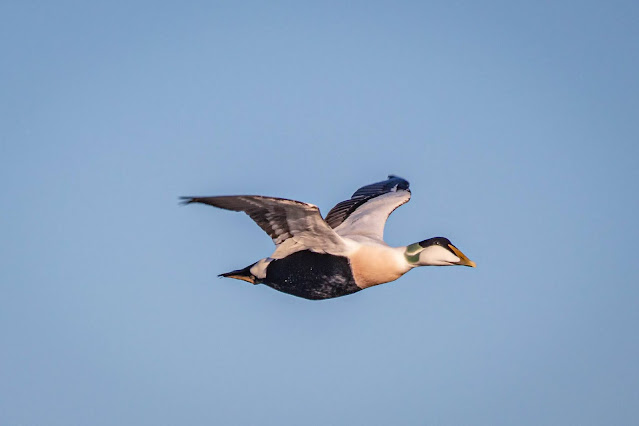 On route to the Waulkmill Hide, a large flock of Golden Plover was on the fields just prior to the turn on the A975. At the hide feeders 20/30 Tree Sparrows, Coal Tit, Chaffinch and Yellowhammer but the large Linnet flock noted yesterday were across the fields and more distant today. Also of note Buzzard, Kestrel and a single Snipe flew up from the nearby reeds. The icing on the cake of another magical day was the skeins of Pink-footed Geese overhead and the amazing sight of thirteen Whoopers Swans heading out of the Ythan around sunset.
Posted by boatbirder at 22:24

I began my visit at Inches Point around mid-morning with the tide now on the turn. I was greeted with the usual cacophony of sound, Curlew, Oystercatcher and passing flocks of Dunlin. Three Bar-tailed Godwits were feeding in the shallows along with two small groups of Knot. By far the most abundant wader was Redshank. A good selection of Gulls was noteworthy but despite an extended search for 'white-wingers', I drew a blank.

The resident large groups of Eider were mostly asleep but occasionally disturbed by a passing Seal. Thankfully, the odd one would drift by and the light today was excellent for photography.

My next stop was the west Waterside Bridge car park, where I enjoyed an extended walk upstream along the shoreline as far as Tarty Burn. Just a little further upstream is Inch Geck Island, which during the breeding season apparently holds the highest concentration of Shelduck in the north-east of Scotland.
There were a few around today but majorly outnumbered by Red-breasted Mergansers, again the light showing them off beautifully with four birds close by. Wigeon, Goosander and a Drake Goldeneye were also recorded.
At one point a Peregrine laid waste to the area throwing up some huge flocks of Lapwing and Dunlin and I also noted three Brent Geese which flew west and out of view. As is the norm at this time of year several skeins of Pink-footed Geese passed overhead.
The same selection of waders during my walk as Inches Point with the addition of Lapwing and Greenshank, the latter of which I've established winter around this area. Along the treeline Chaffinch, Yellowhammer, Song Thrush and Meadow Pipit in the nearby fields.
A brief stop at Snub layby to have my packed lunch, inadvertently flushing a Kingfisher, which I noticed too late as I drove in. My final visit of the day was to the Waulkmill Hide, stopping briefly to check out a distant group of Whooper Swans, arriving at the hide just on high tide. Close in were 15 Greylag Geese but the low sun at this time of day is a real issue and so I concentrated on the area behind the hide where there are feeders. There is a nice colony of Tree Sparrows with 23 counted today along with Chaffinch, Goldcrest and Yellowhammer around the feeders.
In the field behind a large flock of Linnet were feeding on what looks to be a set-aside area, obviously being seeded. I spent a good 45-minutes searching for Twite, unsuccessfully and during this period a Sparrowhawk landed briefly just feet away! It was another enjoyable visit in the beautiful winter sunshine.
Posted by boatbirder at 21:53