With the snow still laying and although the local authorities are doing an amazing job of keeping the pavements and roads bearable I decided on a day indoors reading, blogging and occasionally just concentrating on the local bird movements. With excellent views across to the mountains and lots of skies to observe, not to mention the garden and all from the comforts of home what's not to like!

It was noticeable that there were smaller movements of both Pink-footed and Greylag Geese today and just a single raptor seen when a Buzzard passed through being mobbed by Corvids. The usual selection of Common Gulls and Herring Gulls spent the day marauding and even on occasions dropping down to investigate.
The feeders were busy with mostly Starlings and House Sparrows, although the odd Chaffinch drops down occasionally I don't seem to attract finches. This despite having nyger seed, mixed seed including sunflower, black sunflower and also peanuts. There's plenty spread over the ground too for the Dunnocks and Robins. Coal Tits are the most frequent tit to visit, along with Blue Tits, however, Great Tits are a rarity to the garden and I've only recorded Long-tailed Tits on one occasion.
The high treetops over towards 'The Green' are always worth a look through the scope, a Hawfinch a few weeks ago was an excellent find and today Greenfinch, Chaffinch, Siskin, Bullfinch and Lesser Redpoll were all noted. However, the garden was where the action was today with my strategically placed apples enticing the whole of the most common Thrush species, which made for some interesting battles.

NEW Scottish Life-List Since Relocating in October 2020
Posted by boatbirder at 23:07

When we moved north to Aberdeenshire in October of last year we knew that the summers would be mild and the winters typically cold, so no surprises there! However, nothing had quite prepared us for the unprecedented weather we've been experiencing since the turn of the month. With snow falling on almost every day thus far even the locals have been telling us that they 'haven't seen anything quite like it in many a year'. The fact is though, I absolutely love it. The scenery is breathtaking and my daily walks are exhilarating and as for the wildlife, well they appear to be coping exceptionally well.

Our garden, like many others locally, has become a haven for birds and I find myself out at first light each morning in the freezing conditions and a foot of snow preparing the ground and feeders for the day ahead. Last night the thermometer fell to -14.8C and just an hours drive from here Braemar recorded a low of -23C. Forecasters believe it was the coldest night since temperatures dipped to 27.2C on 30 December 1995 and the coldest February night since 1955.

Today I decided on a walk through the Fetternear Estate, less than a mile from home. The walk begins along the bank of the River Don before heading away through broadleaf and pine woods, punctuated by areas of mixed farmland. Despite the depth of snow, the walk was surprisingly easy underfoot with the daily sub-zero temperatures compacting the snow to a smooth surface unless of course, you wander off track!
At the river bridge, I was amazed to see a considerable build-up of drifting ice islands of various shapes and sizes floating downstream, something I don't believe I've experienced since my time in Canada, certainly not in the UK.  After admiring the phenomenon for what seemed an age and with the river not looking too inviting for the local Dippers I moved on to investigate a few of the local burns. I did eventually come across a pair down towards the very end of one particular burn quite close to the river but unfortunately too far along for a photo. A Little Grebe and single female Goosander were also noted.
Along the treeline, where the snow hadn't quite managed to penetrate, small groups of Redwings could be found feeding among the leaf litter. One particular bird had found a nice unfrozen patch and was so determined not to become disloged from this oasis I actually spent a good while literally within yards of the bird, which in normal times would be almost impossible. It was such an enjoyable period that I was a little reluctant to move on but thought it best to leave the guy in peace.
You can walk for long periods without actually seeing much activity, although I'd heard Siskin overhead, Coal Tits in the treetops and the occasional Treecreeper, with it's unmistakable high pitched call. Then occasionally I'd come across areas of high activity, normally within small open copses and here I would spend long periods. With a little patience these areas paid off today with a good selection of species which included Great Spotted Woodpecker, Yellowhammer, Chaffinch, Bullfinch, Tree Sparrow and a single Brambling. Sadly the Red Squirrels didn't make their presence known today!
Images of the Day...

A Selection of Camera Phone Images... 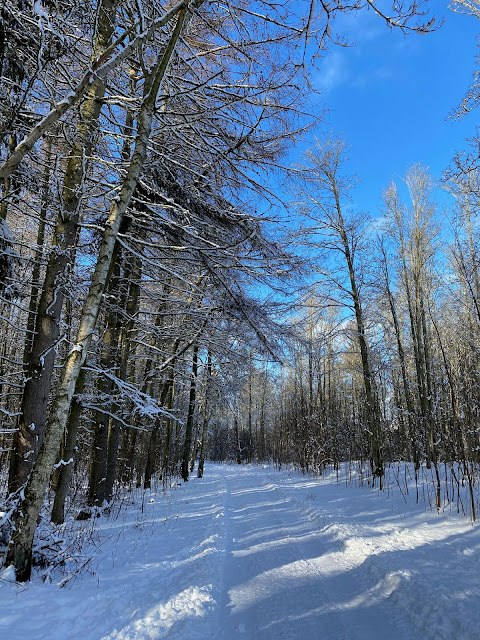 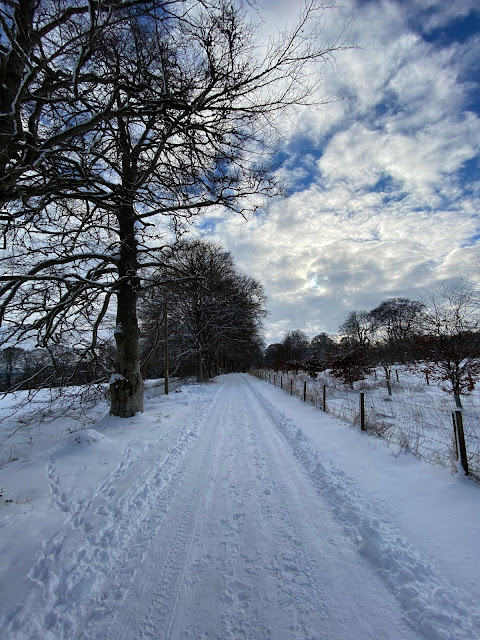 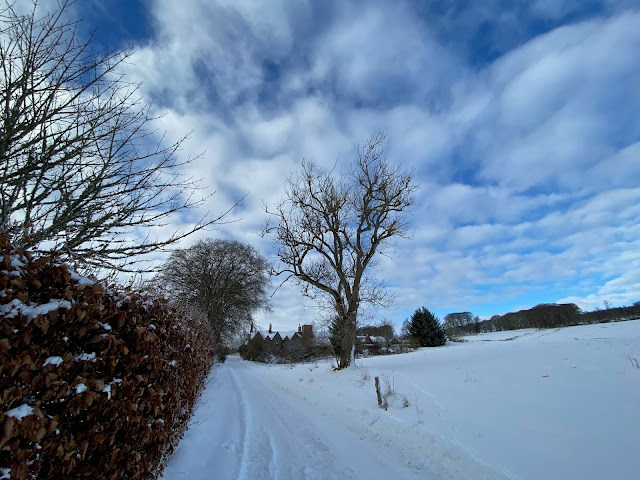 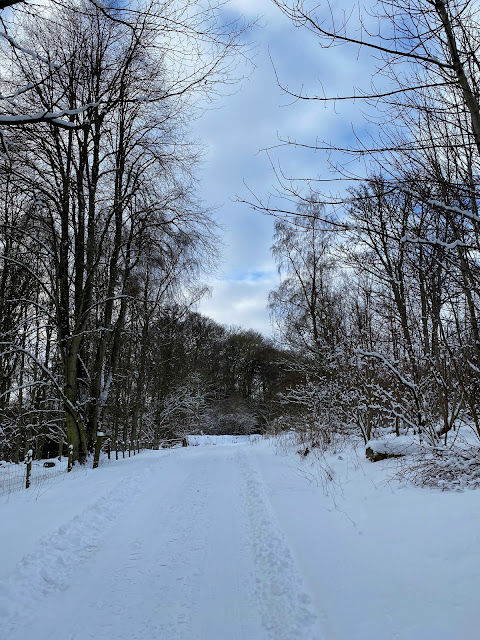 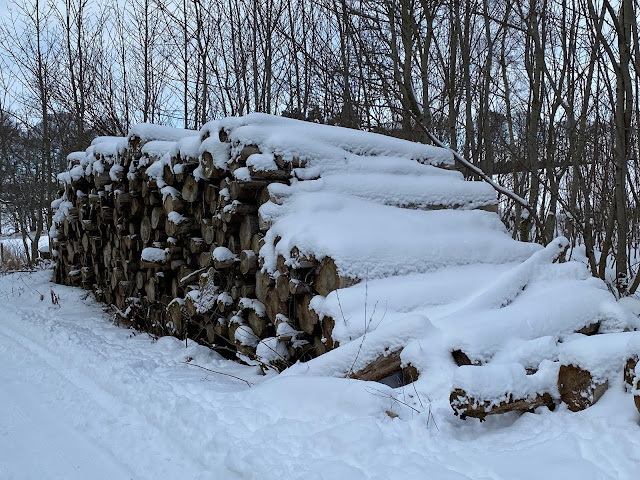 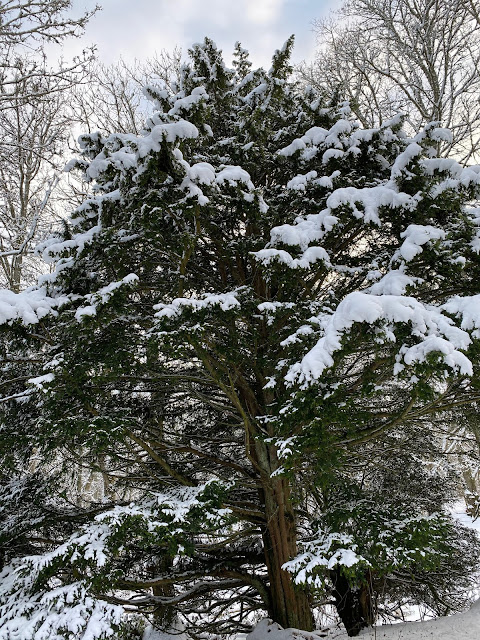 NEW Scottish Life-List Since Relocating in October 2020
Posted by boatbirder at 22:15