On Friday morning (26th) while leaving the boat I was certain I'd heard a Yellow-browed Warbler calling from the nearby willows, literally yards away from the boat. A good search of the area around the canal junction and mooring, unfortunately, proved fruitless.

I was away in Suffolk for the weekend visiting friends, arriving back on Sunday evening and with the clear skies and NN-Easterly winds expected overnight, I was keen to complete a nocmig (recording of nocturnal bird migration). The recording took place between 23:30hrs and 06:00hrs and yielded some excellent results, which can be found HERE.


This morning I'd decided to leave the speakers and microphone on while getting ready to head off, listening to the local Magpies, Jackdaws, Robins and more passing Thrushes. You can imagine my surprise when suddenly a Yellow-browed Warbler began to call once more, pretty close by! I immediately turned the recorder on as the bird continued to call. (listen to above xeno-canto)

Once again I began a complete a search of the area and while doing this decided to call another local birder and nocmigger Theo de Clermont to aid the search, probably dragging him out of bed. Theo arrived some 30-minutes later but within minutes I'd spotted a small bird at treetop level, a Yellow-browed Warbler, my 1st Warwickshire record and once more right on my doorstep. 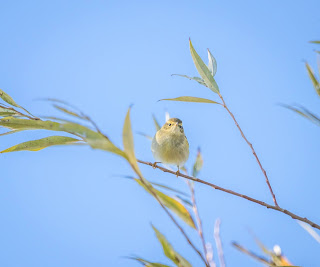 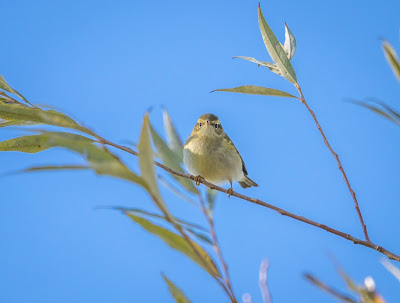 I feel as though I've been neglecting the blog somewhat over the past several weeks so a quick overview to try and bring things up to date.

If I'm not out birding early doors its breakfast going over the previous nights #nocmig (nocturnal bird recordings), which have been pretty much as you'd expect during the early autumn, with lots of Redwings and Song Thrushes moving through the night. The local Tawny Owls and a single Little Owl have been quite vocal around the locality but a real surprise in the early hours of the 18th, when a single Whooper Swan was recorded, possibly the same bird was seen at Draycote that afternoon?

Monday, October 15th.... An early start at Napton Reservoir with Green Sandpiper, (22) Snipe, (2) Water Rail and a Woodcock inadvertently flushed on the track at the top end of reedbed ~ Then three hours at Brandon Marsh with Jim Rushforth searching many tit flocks for a Yellow-browed Warbler reported the day before. Best I managed was (3) Chiffchaff, (2) Willow Tit and (90+) Wigeon on East Marsh Pool.

Tuesday October 16th.... Brambling among the Chaffinch at Napton Churchyard in the gloom this morning.

Wednesday October 17th.... A cracking morning of #vismig (visual migration) at Brandon Marsh when I noted 50+ Skylark, 5 Brambling and 2 Crossbill over the reserve, along with Siskin, Lesser Redpoll and Redwings. Two Stonechat from the Jury Hide but the highlight had to be a couple of late staying Hobby, which performed well over the reserve.

Thursday October 18th.... A day visit to North Norfolk with Theo de Clearmont on Thursday 18th wasn't the most prolific of birding days but gorgeous autumnal weather. Highlights for the day included Great Skua, a flypast of eleven Eider Duck at Salhouse and a couple of Yellow-browed Warblers at Holkham Pines, where once again a juvenile Hobby performed well.

Saturday October 20th.... Quieter visual migration at Brandon Marsh than of late but time spent in the East Marsh Hide produced a couple of Egyptian Geese, Pintail and a Dog Otter.


Saturday October 20th.... An amazing stroke of luck at the marina on Saturday afternoon while heading off for lunch with Dazza. While walking along the East bank she spotted a small group of Thrushes feeding in the Hawthorn, picking out a lovely male Ring Ouzel. Unfortunately, by the time I'd gone back for the camera, this was the best I got before it flew off towards Napton Hill.
Posted by boatbirder at 23:02

Just prior to my visit to France a few weeks back I began to try my hand at #nocmig ( recording nocturnal bird migration). I'd located a very good website https://nocmig.com/ which gives excellent guidance on the setting up of your very own listening post.

As a start, I didn't particularly want to spend the earth on buying one of the rather expensive listening devices at this early stage and so decided on a budget of around £100. I managed to purchase on eBay a rather nifty Yeti Blue USB Microphone, one of the recommendations mentioned by the nocmig site and then ended up buying a small metal bin for burning rubbish from Homebase. I only actually wanted the lid for a parabolic but could understand why they would only sell me the whole thing, mind you, it was only £12.

So having set up my 'Heath Robinson' contraption I then required some sort of software to record onto. Again recommended by the website I downloaded a free edition of Audacity onto my Mac, Job done!

Having practised before going away to France with various volumes and directional settings I managed to complete a couple of nights recording, 23:00hrs ~ 07:30hrs, with some encouraging results. Although a frequent visitor to the marina grounds I was amazed to hear just how active Tawny Owls are for example. Of course, living on the water you can imagine that waterfowl activity far outnumbered anything else, Mallards, Coots, Moorhens etc. This alongside being on the flight path to both Birmingham and East Midlands airports caused a few issues.

Notwithstanding I managed a few early hits, the best of which was a Whimbrel passing through just prior to sunrise one morning. Dawn itself can be quite confusing, to begin with, the local Robins wake early and then a nearby Jackdaw roost becomes active, followed by the departing Gulls from what I would imagine is the Draycote Water Roost, so I seldom record after sunrise. Other notables in the early stages included Barn Owl, Little Owl and several Yellow Wagtails heard leaving the large Pied Wagtail roost we have here at Wigram's. These along with Fox, Muntjac and a few unknowns, one of which turned out to be a strange sounding horse in the adjacent field. The Sheep can also be very nocturnal and have some weird calls.


Having now returned to the marina after taking the boat for hull blacking over the past week I managed to complete two consecutive recording sessions before Storm Callum arrived, both between the hours of 23:00 and 06:30hrs. I was delighted to hear my first Redwings of the autumn, along with several Song Thrush and a single Golden Plover. Of course, the icing on the cake would be to record passing Whooper Swans, now on their return flights or perhaps even a Ring Ouzel!