⛅️25C Tuesday 31st July 2018 ~ After originally setting off for RSPB Frampton Marsh an hours hold up on the A14 had me diverting across to Rutland Water for the day!
The primary reason for the visit ~ General Nature Walk

There was only one place to start if I was visiting Rutland and that was Burley Fishponds over towards the north arm for Purple Heron. A Juvenile, originally seen on one the lagoons over a week earlier had taken to spending most of its time in the thicket towards the back of the ponds and was generally quite elusive. Thankfully after three frustratingly separate visits to the field designated for watching (this is why I don't generally twitch), I was rewarded with the briefest of flight views as the bird relocated from one tree to another. A Greenshank and Red Kite were other birds of note while here along the North Arm.

The rest of my day thankfully was less time consuming and was spent at both Nature Centres, Egleton and Lynton. My time at Egleton was spent at Lagoon 4, where an Osprey was perched most of the time on one of the nesting platforms, before eventually heading off towards the south. Also here at least a dozen Common Terns, including several juveniles plus Green Sandpiper, two Common Sandpiper and three Little-ringed Plover. Egyptian Geese are now well established at Rutland and there were plenty to be found around the lagoons, along with several Little Egret.

I'd never actually visited the hides which look across to Manton Bay before so with the possibility of a Glossy Ibis year tick I gave it a go. From the Lyndon Centre, it was actually quite a walk, around 1km, before I reached the 'Shallow Water Hide'. This is obviously a good place to see the Rutland Project Ospreys and three birds were sitting proudly over towards the platforms. Lots of Gulls just loafing around, but nothing unusual, then the first of two Wood Sandpipers suddenly appearing out from within, followed shortly after by a Green Sandpiper.

A single Curlew was sleeping most of the time off to the right and just before I left it decided to go walk-about, offering a photo opportunity. Up until this point, there'd been no sign of the Glossy Ibis but would you believe it a final scan before heading off found the bird feeding in the shallows off in the distance, a nice stroke of luck 👌

On route home a stop at Eyebrook Reservoir, where it was quite easy from the roadside fence on the west side to pick out a reported Curlew Sandpiper, this along with another two Wood Sandpipers, which were feeding happily along a narrow spit.

⛅️30C Wednesday 25th July 2018 ~ Spent the morning at RSPB Otmoor meeting up with Alan Boddington at our marina car park around 07:00hrs
The primary reason for the visit ~ Brown Hairstreak


On arrival, we made our way along to the Turtle Dove feeding area, in search of a year-tick for Alan. We'd only gone down the path halfway when a bird appeared on top of one of the telephone poles. Although we had reasonable views, enough for his year-tick, the bird was flushed by two birders ahead of us and not seen again, although we did hear it.

Birding wasn't really the priority today but we did complete a walk up to the hide and beyond, with the heat building bird activity was minimal and most of the wet areas along this stretch were devoid of water. We naturally encountered many Red Kites and other raptors included Kestrel, Buzzard and Marsh Harrier. The only Wader was a Common Sandpiper, which in fact I only heard briefly across on 'Big Otmoor'.

Searching the treeline we eventually found a couple of Brown Hairstreak high up in the “master ash” along the Roman Road but remarkably it had become overcast and despite our patience, they simply refused to move. Unlike the many Purple Hairstreak, which seemed to be everywhere today!

After leaving Otmoor we drove the short distance across to Aston Rowant Nature Reserve. The reserve lies on the northwestern scarp of the Chiltern Hills and overlooks the vale of Oxford. It is characteristic of the Chilterns landscape and the majority is chalk grassland, which is full of colourful wildflowers, perfect for butterflies. The remainder of the site includes areas of mixed scrub such as bramble and hawthorn, areas of juniper and ancient beech woodland.
The primary reason for the visit ~ Silver-spotted Skipper Butterflies


By the time we arrived on site the temperature had soared to 30C + and as we made our way along the escarpment it was simply sweltering. Many butterflies on the wing in the now humid and sunny conditions, most refusing to settle but it was certainly a sight to behold. Chalkhill Blue, many quite worn, along with lots of Common Blue, several Brown Argus and a single Small Copper. A full list at the end of the post.

We connected with around 30+ Silver-spotted Skipper, notable against other Skipper species in my opinion by its moth-like flight. Thankfully several settled for photographs when the sun occasionally gave us respite behind a cloud or two. A bonus find was a Hummingbird Hawk-moth, which I had fun photographing, eventually coming up with the enclosed photos.

An excellent afternoon only blighted by the constant rumble of the M40 motorway traffic below and of course the stifling conditions, which are becoming unbearable, even for me 😅

More Images of the day


A morning visit to Brandon Marsh produced a site first for me in the form of a Pectoral Sandpiper. This particular species has dropped in on only a few occasions during my time at Brandon but I'm usually on holiday or up country, thankfully not today!

I'd only expected to spend a short time in the hides around East Marsh before heading out across the reserve in search of butterflies, bugs and Odonata! In the Wright Hide, I was pretty excited to see a couple of newly fledged Little-ringed Plover chicks on Willow Island, looking pretty vulnerable with what looked like mum and dad chasing off an inquisitive Lapwing. Suddenly the brief call of a small wader drew my attention to a bird which had dropped in on the edge of Willow Island. My initial thought was Wood Sandpiper but the call wasn't right and when I got eyes on the bird I was pretty convinced it was Pectoral Sandpiper. I sent a few 'back of the camera' photos out for second opinions and wasn't surprised to have it confirmed.

It was a nice find for me and the bird hung around for the few hours I was there, but unfortunately never came quite close enough for the money shot! The bird was still on site when I departed around 1pm. 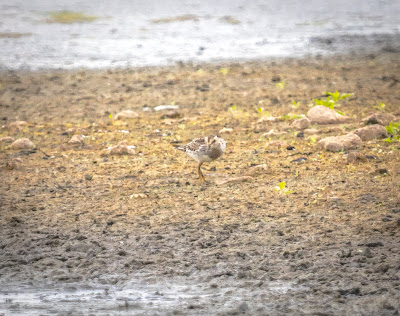 Also of note today on East Marsh Pool: (2) Green Sandpiper, (2) Oystercatcher, (6) Little-ringed Plover, including the two fledgelings, (11) Common Terns, a mixture of juvenile and adult, plus a Sparrowhawk fly-by with prey, thankfully not the Pectoral 😀

☀️26C Tuesday 3rd July 2018 ~ Ryton Wood: Although part of Ryton Wood was lost to sand and gravel extraction in the 1960s, the wood has been returned to its present excellence through traditional management practices, and is one of the county's largest surviving semi-natural ancient woodlands. Ryton Wood covers 85 hectares, has been designated as an SSSI and boasts an extensive list of notable species.

The primary reason for today's visit ~ Hairstreak and Emporer Butterflies.


After returning to our home mooring, enjoying a long weekend out cruising, a particularly quiet early morning visit to Brandon Marsh, where the highlights were a dozen or so juvenile Common Terns and my first Gatekeeper butterflies of the year.

From Brandon, I headed off to Ryton Wood, parking in the small Warwickshire Wildlife Trust car park just off the A425. My first walk was the track which leads around towards the rear of the Police College buildings. It wasn't long before the first of eight Silver-washed Fritillaries were noted, with plenty of 'Whites' on the wing too: Large, Small and Green-veined.

Much more to see along this track with many Purple Hairstreaks both at ground level and in the tree canopy. White-letter Hairstreaks were also notable but in smaller numbers and could also be found along the ground.

I walked as far as the Butterfly Conservation gate before returning to the car for a coffee after a fantastic hour or so which also produced: Brimstone, Small Skipper, Large Skipper, White Admiral, Red Admiral, Comma, Speckled Wood, Gatekeeper, Ringlet and Meadow Brown.

Finally, after coffee a walk halfway along the main track in search of Purple Emporer. It was a simple task to be fair with 4 specimens in the usual tree which supports the large bat box, which is, in fact, currently playing host to a large population of Bees. Sadly despite other species posing nicely for photos, the Emporers were less obliging, remaining high in the canopy during my stay.

Other images of the visit...