⛅️18C Friday 23rd September 2022 ~ With Dazza away I'd decided to make a day of it starting on the Ythan Estuary at Newburgh and working my way northwards ending at RSPB Loch of Strathbeg in the early afternoon.
Having checked out the vast amounts of waders at the 'Snub' layby overlooking the Ythan and finding a creditable 11 species but nothing out of the ordinary, I drove the short distance around to Meikle Loch, initially to catch up with a Black-necked Grebe, which I required for my Scottish year list.
It wasn't long before I'd located the Black-necked Grebe and the now long-staying Red-necked Grebe, but a small wader on the far bank immediately took the eye! Pete Shepherd who was also watching the bird but further around the loch from my location came over and we discussed the various features of the bird but Pete had already identified it as a Baird's Sandpiper. It was an excellent find for Pete and we spent the next hour watching the bird and listening to its flight call as it moved short distances around the loch. It was occasionally joined by Ruff and Spotted Redshank.
After Meikle, I headed off towards Peterhead to grab a coffee while en route to Strathbeg but decided to stop off at the Boddam power station viewpoint. With so many Yellow-browed Warblers reported on Shetland recently, this would be as good a place as any to search for a mainland bird. There are lots of gorse, rowan and woodland to search here and my luck was in! Having first heard the bird call I managed good views a short time later in the woodland area at the top end of the car park, another year-tick.
My final stop was at RSPB Loch of Strathbeg and I spent another hour or so watching and listening to the 100s of newly arrived Pink-footed Geese. I spent the duration overlooking Starnafin Pools from the picnic bench which held a small selection of waders: (27) Dunlin, (7) Greenshank, (3) Ruff, (3) Snipe, (5) Black-tailed Godwit and a single Knot. Wildfowl included Shoveler, Wigeon, Teal and Gadwall.

NEW Scottish Life-List Since Relocating Permanently to Aberdeenshire in October 2020
Posted by boatbirder at 23:33

🌧14C Thursday 22nd September 2022 ~ On the eve of the autumn equinox a morning walk in the rain around my local patch at Dalmadilly Ponds, which surprisingly produced plenty of activity. There are still small numbers of common migrants to be found, including a couple of hormonal Chiffchaffs happily singing away in the downpour. No less than three Blackcaps were noted feeding on the Elder, plus a brief view of Garden Warbler and at least two Willow Warblers.
Fruit-bearing trees have certainly had a bumper year and the Bullfinches were making the most of them. I've always found the ponds to be an excellent place for Bullfinch and today was no exception with (24) recorded!
Tit flocks are now beginning to form up and searching through a mainly Long-tailed Tit group, Goldcrest, Treecreeper, Blue Tit, Great Tit and Coal Tit were all recorded. House Martin's were numerous today along with smaller numbers of Swallows all coming low to search for insects. Plenty of Siskin to be found feeding mainly in the tree canopy and the first autumnal party of (18) Pink-footed Geese flew over from the north. Also overhead at one stage a flock of (11) Lesser Redpoll. Looking down onto the River Don (3) Grey Wagtails and a party of (6) Goosander but still no sign this autumn of any Dippers, normally regular along this stretch!
On the ponds (3) Little Grebes, including one on the larger pond but unfortunately, unlike last summer I've seen no sign of any breeding this year. This I feel mainly due to the disruption by paddle borders, dingies and swimmers. Since moving here I've never been certain as to whether the ponds, left over from the quarry extraction were built for leisure or nature. There are two excellent hides which remain locked (you have to request the key) which in two years I've never seen used and even if open would be pretty useless as the paths run directly in front!
Despite the weather, there were several Vapourer Moths in flight, which simply refused to land and of course, this time of year is also good for fungi with a nice find of Dryad's Saddle. 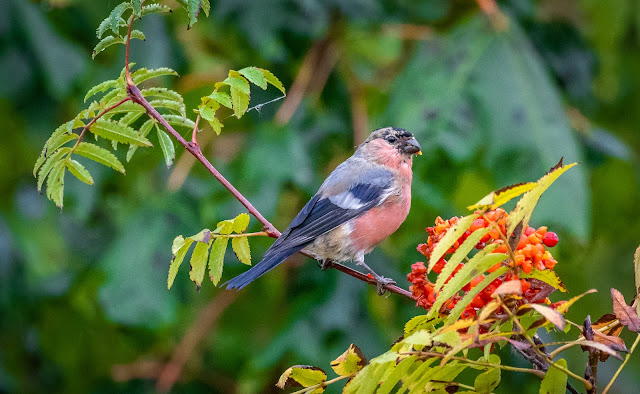 Isle of Mull  ~ 9th to 11th September 2022 ~ I'm Normally in Tarifa Spain for the raptor migration at this time of year but as an alternative, I decided to head off to the Isle of Mull to catch up with a friend instead. With covid etc, It's been a few years since I met up with Theo de Clermont one of my old Warwickshire buddies but with Theo working on the Isle of Mull for the season as a naturalist guide for Nature Scotland, I felt this was a perfect opportunity to do just that.

It was a brilliant weekend of Golden Eagles, White-tailed Eagles, Hen Harriers, Otters and a self-found Pectoral Sandpiper. Also of note during my few days were Little Stint, Curlew Sandpipers, Pale-bellied Brent Goose and Twite. Cetaceans included many pods of Common Dolphins, a Minke Whale, and many Common Seals.
The above Pectoral Sandpiper was picked up by Theo along the tiniest of burns while we were walking in the Calgary area of the Island, I have to say a typical Theo find! What a brilliant birder young Theo is turning out to be.

Unfortunately, it wasn't the best weekend with the camera with most sightings at a distance and digiscoped, the best of which is above.
🌤 18C Tuesday 20th September 2022 ~ With the easterly winds now a distant memory things have calmed down somewhat locally from a rarity perspective but there's still plenty happening and I'm sure still more to come, particularly with the amount of Yellow-browed Warblers currently being reported on Shetland. A few visits to the Ythan Estuary over the last few days have seen lots of Pink-footed Geese arriving back from Iceland, mixed in with smaller numbers of Barnacle Geese, likely arriving from the Svalbard population before heading down to the Solway Firth.
Wader numbers are increasing with some huge flocks of Golden Plover and from the large counts of Ruff recently it would seem this particular species has had a good year.

🌤⛈💨🌈18C Wednesday 7th September 2022 ~ Torrential overnight rain and the odd rumble of thunder gave way to sunny periods and a pleasant breeze as I arrived at Girdleness mid-morning in search of autumn migrants.
I began just below the allotments with a search of the large sycamore tree, always worth checking out and headed along the shoreline towards the southern breakwater. At least six Rock Pipits were dodging the crashing waves but little in the way of migrants by the time I reached the breakwater, except for a couple of Willow Warblers.
A search of the bramble and gorse around Tory Battery began to produce. Firstly a Pied Flycatcher followed by Garden Warbler and Common Whitethroat.
I met up with Mark Lewis and Kerstin Kober, two local birders shortly after and we decided to team up for some hedge bashing for the rest of the morning and early afternoon. It certainly paid off with an array of finds which included: (4) Whinchat, (12) Wheatear, (2) Common Redstart, (3) Garden Warbler, Pied Flycatcher, Spotted Flycatcher and a Barred Warbler. On the sea a Mediterranean Gull and a distant Humpback Whale!
A thoroughly enjoyable outing in great company and as I arrived back at the car (2) Common Redstart and a Lesser Whitethroat at the allotments.

A sustained period of easterlies or south easterlies has certainly produced some excellent birding around the Aberdeenshire coastline over the past several days.

The Ythan Estuary has literally been awash with waders, the best of which were (3) Curlew Sandpipers from the Waulkmill Hide and a Spotted Redshank from the Snub Layby. At least three Osprey have also been fishing regularly during my visits.
A couple of evenings of sea watching from Girdleness lighthouse at Aberdeen Harbour has produced many Manx Shearwater, (9) Sooty Shearwater, at least (2) Long-tailed Skua, plus smaller numbers of Arctic Skua and Great Skua, the latter sadly decimated recently by Avian Flu! There have also been reports of Pomarine Skua, Balearic Shearwater and Cory's Shearwater but unfortunately not during my watches.
On Saturday, August 3rd I spent a few hours at Rattray Head searching the gorse and dunes around the lighthouse cottages which produced some excellent finds. Pied Flycatcher, Common Redstart, (2) Spotted Flycatchers, Whinchat and (5) Stonechat were all noted.
After Rattray, I decided to head back through Peterhead to pick up a coffee, with a plan to stop at Longhaven on the route home to try for a reported Red-backed Shrike. It was while picking up a coffee at MacDonald's that news of an Arctic Warbler at Strathbeg popped up on the WhatsApp group. It was a 10-mile trek back to Strathbeg and a reasonable walk out to what is known as The Plantation on the north side of the loch but as it turns out well worth the effort.
When I arrived the finder, Philip Bloor was still on site and thanks to Phil, who was actually just leaving I was onto the bird within 15 minutes. My gratitude to Phil for hanging on and after he departed I spent an hour at the plantation with occasional glimpses of the bird, along with Wheatear, Spotted Flycatcher and Pied Flycatcher.

To round off an excellent few days I managed brief views of a Blyth's Reed Warbler at Kinneff Old Church. Excellent timing really as I was over that way picking up Dazza from Stonehaven rail station after she had spent the weekend in Dundee.

A few more images of the last several days...

NEW Scottish Life-List Since Relocating Permanently to Aberdeenshire in October 2020
Posted by boatbirder at 22:56