❄️☁️⛅️ 8C ~ Wind ⇐ SW@6mph  Tuesday 21st January 2020 ~ My first visit of 2020 to the Norfolk coast in the company of Alan Boddington, John Raven and Geoff Hood from the Brandon Marsh team.

Our first stop had to be a small area of dung heaps about 400m down a track east of the Sedgeford to Ringstead road for the now long staying Eastern Yellow Wagtail (Motacilla tschutschensis). This would be a lifer for John, Geoff and I as Alan had already visited a few weeks earlier and as luck would have it we didn't have to go far this time! The bird was actually feeding on another dung heap right alongside the roadside adjacent to the track and with a few other birders already watching, we were onto it within a few minutes of arriving.

The bird was feeding and occasionally calling along with a couple of Pied Wagtails and a small number of Meadow Pipits. The morning mist hadn't quite cleared and the early frost was still lying so it was dank and dreary during our half-hour stay and we never quite got to see the bird in any great detail, although the yellow still managed to show through.

After a brief stop at Hunstanton for Fulmar, we moved on to Thornham Harbour for Twite which didn't actually go according to plan. Despite spending a good 45-minutes here there was no sign, although ten were reported later in the day. There were a few Rock Pipits to keep us entertained, along with Marsh Harrier and a grazing Chinese Water Deer, plus overhead the usual passage of Pink-footed and Brent Geese.

At RSPB Titchwell the weather had brightened but we were disappointed at the start to find that half of the bird feeders had been removed, apparently due to a Rat problem, so any chance of finding a Brambling had somewhat diminished. The footpath walk along to the beach produced Water Rail, flyby Peregrine and Geoff found a nice group of Bearded Reedling, I counted at least eight but they were quite distant. Some good views of a Red-breasted Merganser close in on the fresh marsh and a short sea-watch produced Great Crested Grebe, Goldeneye and Red-throated Diver. No sign of any Water Pipit from the Parinda Hide but a good selection of waders both along the beach and on the tidal marsh, the best of which was a Spotted Redshank but I'll post a full listing at the end of the post.

A short stop on route to Holkham for a scan across the freshmarsh for Cattle Egret and Great Egret, both of which were located, along with the addition of a Barn Owl. Then on for Shore Lark and Snow Bunting in the fenced-off area east of the gap from the car park. From the dunes at least 1000 Common Scoter offshore although distant and despite watching for a good while I can't honestly say for sure that I noted any Velvet Scoters among them! With very little flight movement it was impossible to be sure. Along the shoreline at least fifty scurrying Sanderling and back around the parking area a dozen Grey Partridge feeding on the grass, along with our only Red Kite of the day over the reedbeds.

Before heading off for the roost at Warham Greens a stop at the fields just north of Wells Quay for yet another long-staying bird, Rough-legged Buzzard. We viewed the bird (apparently in its regular tree and not doing much) at a distance from a gated area just before the old railway bridge. The roost at Warham Greens was a brilliant end to a great days birding with five Hen Harriers, including two males, three Merlin, Peregrine and several Marsh Harriers.

☀️6C ~ Wind ⇐ w@3mph  Saturday 18th January 2020 ~ For the past ten years or so Dazza and I have made an annual pilgrimage to WWT Slimbridge during the month of January. It's not only a great place to see certain species that your perhaps unlikely to see in the wild during your lifetime, but it's also a great place for an early boost to the year-list. Of course with our big move up to Scotland later this year, this may well be our last visit for some time!

It was a great start with a couple of Common Cranes flying right over our heads as we made our way up to the centre from the car park. Plus, reported shortly after our arrival, a Cattle Egret, which was showing quite well on the south shore.

It was a typically enjoyable visit with the usual selection of wintering wildfowl on the 'Dumbles' including (6) Cranes, (22) Bewick Swans and various numbers of White-fronted and Barnacle Geese.


Other notable sightings: Chiffchaff, Marsh Harrier and a very showy Water Rail.
Posted by boatbirder at 23:37

☀️9C ~ Wind ⇐ S@4mph  Sunday 12th January 2020 ~ After a morning at Brandon Marsh, where there was no real change to recent sightings Dazza and I enjoyed a local late afternoon walk around the canal at Shuckburgh.

We'd already heard the rumours regarding the local Little Owls demise and after a chat with the lady who moors at the bottom of the field where they nested, our fears were realised.

Apparently one had died during the summer due to predation by the local Jackdaws and the other had simply moved on. Still, Dazza insisted we check out the usual spots, more in hope than expectation but there was no sign.

A species which does seem to have had a good 2019 is the local Raven population. It's not often you can walk the area without hearing the 'cronk cronk' of a Raven but by the time we'd arrived back at the car we were into double figures! Other sightings during our walk included a couple of Mistle Thrush around the church, a Roe Deer, eighteen Golden Plover but the highlight was a Barn Owl. Which I managed to film as it quartered the field adjacent to where the Little Owls used to live! We arrived back at the car just as the light was fading, a Tawny Owl calling in the distance.


Barn Owl at Shuckburgh
Posted by boatbirder at 22:41

Before heading off in search we began the day at the Egerton Centre bird feeders, were of note we managed both Willow Tit and Marsh Tit. Alan also managed a couple of Tree Sparrows too but before I arrived!

Old Hall was our first stop in search of a Red-necked Grebe an area most associated with this bird. However, after a good search without results, Birdguides suddenly came up with a sighting at the North Arm, actually our next port of call so we headed off.

The walk down to the water from the top of the road produced our second Willow Tit of the day and shortly after setting up our scopes (2) Black-necked Grebes, Slavonian Grebe and Red-necked Grebe were all noted and showing well within a short distance of each other. No sign of any reported Scaup during our stay but a Great White Egret on the far bank and a single Redshank were other notables.

A stop at Eyebrook Reservoir before heading home and here three Smew with two drakes and a female, all seen along the dam wall. Red Kite and two Raven were other notable species during a very successful day.

No photos from me today but Alan did manage a decent video in the poor light of the two drake Smew as reflected in his tweet below.

☁️7C ~ Wind ⇐ S@9mph Monday 6th January 2020 ~ My first visit of the year to Brandon Marsh today, basically to get the year list off to a start. The last time I was here before Christmas the place was completely flooded out and it was nice to see a return to some normality.

I took a circular walk clockwise passed the windpump and through New Hare Covert. It was a little breezy and overcast but it was nice to pick up a small group of Redwings flying through and a single Lesser Redpoll, which continued on overhead without stopping. A couple of Bullfinch around the sheep field gate and although the covert was particularly quiet I still managed a Great Spotted Woodpecker, Song Thrush, Wren and Jay by the time I emerged at the golf course.

From the Wright Hide a single female Goldeneye and a single Pochard, plus Little Egret and a full set of the usual wildfowl, with the exception of Wigeon.

However, the highlight for me was a Peregrine Falcon which although not making any attempt for prey did manage to completely flush the whole of East Marsh Pool. Other notables on my list of just 48 species included Water Rail, Siskin, Raven, Goldcrest and Treecreeper.

After lunch a trip over to Northants to catch up with a thankfully long-staying Great Grey Shrike. It's a bit of a trek and wellies are definitely required but it's well worth it! 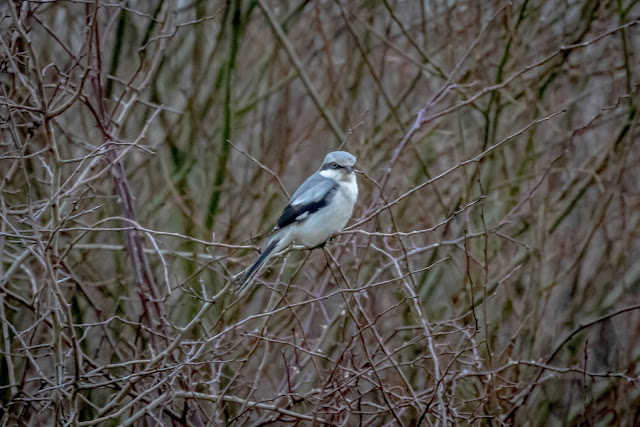 ☀️16C ~ Wind ⇐ NNW@5mph  Wednesday 1st January 2020 ~ Dazza and I enjoyed an afternoon walk in glorious weather above the mountains of Mijas Pueblo. From the car park at Sendero Cerro de la Medialuna, the old quarry you make an initial steep climb which leads on through the woods where there are lots of tracks to explore producing some absolutely stunning views across the Hoya de Malaga from Puerto de la Graja.


Even before heading up the pass the car park area is a great place to explore and a short 15 minutes scanning the rocky outcrops and small Aleppo Pines revealed Black Redstart, Dartford Warbler, Black Wheatear, Rock Bunting and Linnet.

As you make your way up to nearly 3,000ft the habitat changes and repopulated pines predominate, although these are mixed with Holm oaks and other typically Mediterranean shrubs in the areas closer to the summit. A few Crossbills could be heard passing overhead and despite seeing them in flight we never quite managed any decent views today.

However, the Crested Tits and Firecrests more than made up for that. Dazza also managed a Short-toed Treecreeper, strangely quite a rarity here during our visits but it flew before I could get on it! Even at this early stage of the year migration is already beginning here in southern Spain with a huge passage of Raven's today with small groups of ten or so passing constantly overhead, their cronking calls echoing around the mountains.

Siskin, Chaffinch, Coal Tit, Blue Tit, Great Tit, Wren plus a few small groups of Long-tailed Tits, which revealed the odd Common Chiffchaff and a single Crag Martin made up the species numbers, which is always quality rather than quantity during our visits here!

A Few More Images Of The Visit...