With only 6hrs 44 minutes of daylight up here at this time of year when the sun finally shines after a few dreich and dreary days, it's time to make haste.

A pleasant stroll from home around the local Fetternear Estate produced a decent variety of species and although most posed briefly enough for the odd record shot the local Red Squirrels were not playing ball. Probably still annoyed by the loss of at least two dreys during Storm Arwen and who could blame them!
There are some good feeding stations based in the gardens of the few residential properties around the estate and these are always worth spending extra time scrutinising, thankfully I'm fortunate to know the residents!
A colony of Tree Sparrows are always a pleasure to watch and while overlooking one feeding station a couple of Great Spotted Woodpeckers were busy hammering in the trees above. Brambling, Siskin, Lesser Redpoll, Chaffinch, Greenfinch, Yellowhammer, Coal Tit and Treecreeper all noted, along with a flyover Common Buzzard.
Several Bullfinch were busy along some of the ditches adjacent to the footpaths and like most of my travels around Aberdeenshire, there are always Roe Deer on the move.
An enjoyable walk overall with Jays busy looking for acorns under the small numbers of Oaks we have here, and of course plenty of Pink-footed Geese passing noisily overhead.
Just a few Fieldfare and Redwing were seen today as it's apparent that there all currently in the village enjoying the bounty of berries around the gardens! I was saving these for the Waxwings 😉
Posted by boatbirder at 16:44

First trip out for a while with a drive up to RSPB Loch of Strathbeg, primarily to see if a reported Red-necked Grebe on the 8th was still about.

As it turns out my luck was in with some good scoped views early afternoon. Although the bird remained distant from the Bay Hide I did manage a few record shots. This is my first since relocating here permanently last year and also a late-year tick.
100s of Whopper Swans about today as you'd expect, plus literally 1000s of Wigeon and while at the Bay Hide I also managed a couple of distant Scaup. Driving home through the backroads it's clear to see how much devastation the recent storms have reaped on the area. Literally, hundreds of trees felled and lots of flooding around with many fields playing host to the wintering Pink-footed Geese.

NEW Scottish Life-List Since Relocating Permanently to Aberdeenshire in October 2020
Posted by boatbirder at 17:22

My first visit to Inchgarth Reservoir on the north bank of the River Dee in Aberdeen after a report of a Black-throated Diver.
Thankfully the bird hung around for a few record shots in the gloom. I was grateful to Ian Broadbent, the Aberdeenshire county recorder who found the bird and was still on site when I arrived. This is Ian's patch and he tells me that this is the first Black-throated Diver at Inchgarth since 1996. A very nice find and thanks to Ian for getting the word out quickly. 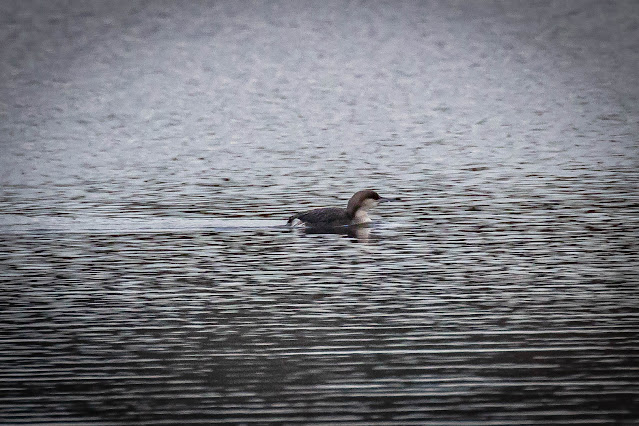 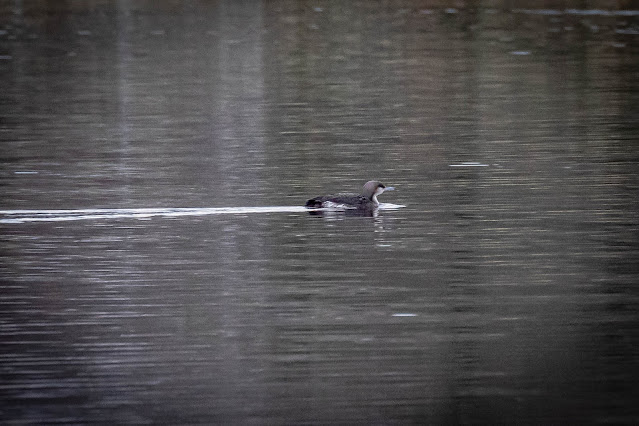 While visiting B&Q today in Peterhead to seek a few items for Storm Arwen repairs (we were without electricity for over 30hrs too during the storm) I dropped down and spent an hour at the Harbour. It's quite a bonus to be able to drive around this busy bustling harbour and watch the fishing fleet come and go, along with a number of supply vessels for the rigs. A great place for 'white-winged Gulls too if there are any boats unloading but I was far too late for that today.
I was hopeful of finding perhaps a sheltering Little Auk, or if ultra lucky maybe even a Brunnich's Guillemot but it wasn't to be!
A good visit though nevertheless with a couple of Great Northern Divers, Puffin and Black Guillemot, the latter not too common to the northeast. Also while here plenty of Shag and the usual Harbour Seals.

Another autumn trip to Andalusia is complete with just a few loose ends to tie up including an afternoon visit to Fuente de Piedra and a drive up to Sierra Loja over the final week.

Fuente is always a treat but more often than not these days water is scarce on this vast saline lake, the largest lagoon in Andalusia. Normally awash with Greater Flamingo today the wintering Cranes outnumbered them, producing the usual amazing sights and sounds.
We arrived around midday and as we made our way from the car park to the Visitor Centre (closed as per usual) to enjoy our packed lunch a Red Kite drifted west. By the time we moved on to the Observatorio El Laguneto, the only other main body of water, we'd recorded four Black Redstart and at least twenty Blackcap feeding around the centre.
From the hide, Black Redstart, Spanish Sparrow and Stonechat with the Laguneto holding double-figure Northern Shoveler, Grey Heron and Black-necked Grebe. However, the highlights while here consisted of three Marbled Duck and a single Ferruginous Duck.
A drive around the roadside perimeter of the main lagoon as we headed home had to be the quietest we'd ever encountered and were it not for the sighting of a stunning Black-Winged Kite we'd have come home a little disappointed.
Our final outing was a drive over to Sierra De Loja a limestone massif its highest point being Sierra Gords at 5400ft. It is also an open and beautiful but remote and sparse place. In winter it is covered in snow and ice, although no signs yet. The landscape consists of a few trees, low lying scrub and bushes but is mainly short, dry grass, and rocky terrain, the scenery is simply stunning and the birding can be very rewarding. You access the dirt road that leads up to the top at the Los Abades service area exit off the A92 road to Granada.
No sign of any Azure-winged Magpies a regular in the woodlands here as we made our way up the dirt track (which with care is easily drivable) but a couple of Black Wheatear, three Thekla Larks, Hoopoe, and the first of four Iberian Grey Shrikes seen today before we reached our first stop around 1500ft at the old quarry.
A walk around the quarry had a dozen Red-legged Partridges scurrying past but a Blue Rock Thrush took the eye, along with more Stonechats, Thekla Larks and a single Corn Bunting.
As we continued our ascent we paused when a group of 30+ Chough suddenly descended just below our position. While out photographing a couple Rock Bunting also appeared along with Iberian Grey Shrike.
At our turnaround point, some 5000ft up there's a small oasis of Hawthorn and although mostly depleted of berries by now we managed to locate a small group of wintering thrushes, which we regularly encounter up here. These included Redwing, Mistle Thrush and at least six Ring Ouzel. While here a small party of Southeastern Spanish Ibex (now reclassified) and during our descent, a flock of some thirty Rock Sparrows, along with a single Alpine Accentor, spotted by Dazza ended another brilliant visit to Spain and I hope you've enjoyed our posts.
More Images of the last few days...

🍂🇪🇸 Friday, November 12th 🌞 20C ~ With Dazza working today I thought I'd take the opportunity to spend the morning at Zapata and in particular checking out the reedbeds which run adjacent to the airport perimeter road. During our visit on Wednesday, we failed to locate a few of our target species: Bluethroat, Penduline Tit and Stone Curlew.

Sometimes it pays off to simply sit and watch for movement in the reeds or if you can find an area of bullrush lookout for the floating seeds as they are plucked out by Penduline Tits. After an hour of doing just that it was actually the fine whistled call that alerted me to a single bird that appeared in the reeds just below my position.
One of my target species located and next to the Bluethroat which I'd actually heard a few times during the morning, its unmistakable dry throaty clicking deep within the reeds. Finally, having the patience of a saint and at one time even being completely distracted by an Egyptian Mongoose, a European first for me I finally connected with a Bluethroat.
Such is the case of the Egyptian mongoose, which is native to North Africa but is also found in Spain and Portugal. It has, though, no pre-human fossil record in Iberia, and would be incapable of swimming across the Strait of Gibraltar. So the evidence points to it having been carried there by human agency.
An excellent morning thus far and from here a leisurely walk back to the car checking out the surrounding scrubland for Stone Curlew but without success. On New Years Eve 2019 I recorded a Blue Rock Thrush here, obviously, a wintering bird coming down from the mountains for the duration and today another, almost in the exact same location! Other Species of Note today: Common Buzzard, Black Kite, Black Redstart, Stonechat, Serin, Common Waxbill, Chiffchaff, Greenshank, Kingfisher, Little Egret, Hoopoe and Skylark.

🍂🇪🇸 Thursday, November 11th ⛅️ 21C ~ Whenever I visit Spain there's always one particular area that's on my 'must do' list and just a 10-minute drive from the villa is the old quarry at Canteros Los Arenales ~ Site details HERE

At the car park at Sendero Cerro de la Medialuna, there are rocky outcrops and a good selection of repopulated pine mixed with Holm oaks and other typically Mediterranean shrubs. Almost immediately on arrival you hear the grating calls of Dartford Warblers echoing around the old quarry. Just sit for a while and it's not long before the stars of the show appear in the form of Black Wheatears.
I've been coming to this part of Spain for over 10 years and this is always one of the highlights for me. These are sedentary birds but have quite large territories and the best time to see them for me is late autumn. Some actually mate for life and today I managed to see three birds in total, including a pair.

From the car park I took the steady walk up to around 2,500ft to Puerto de la Graja which offers stunning views across the Hoya de Malaga. Species of note today included Crag Martin,  Short-toed Treecreeper, Rock Bunting, Crested Tit, Firecrest, Siskin, Crossbill and Peregrine. Some large congregations of Chaffinch winter up here too and in amongst them you can sometimes find Brambling, although not during this visit. However, today was all about Black Wheatears!
Posted by boatbirder at 21:39