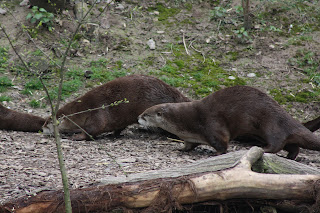 It's just nice to be able to comprise a blog entry without being hammered by force 10 gales, the last 24hrs have been bumpy to say the least, but thankfully it's now starting to abate.

When I arrived at Brandon Marsh this morning to join the works team I decided to go straight to Big Hide, with the wind gusting and the threat of more heavy rain forecast I was taking no chances.

When I arrived at the hide in near darkness Martin Durkin, another Brandon regular, informed me that only minutes before three Otters had passed right in front of him heading right to left. I couldn't believe my ears, you know how it goes, "you should have been here 5 minutes earlier"! Making a quick decision I decided that they were probably heading for the River Avon, which runs the perimeter of the reserve, and that to do this they must pass through Carlton Pool.

There is in fact an inlet between Big Hide and Carlton Hide and so at break neck speed I decided to check here first. Sure enough as Martin came scurrying behind me the three Otters appeared, the sun not yet up it was difficult to make out what the three comprised of before they moved off, but sure enough Otters!!

Settling in at Carlton Hide Martin and I were joined by Mike Lee, another team member who thankfully had his phone switched on, and to our delight the three appeared out of the reeds towards the back of the pool a short while later. A truly amazing 5 minutes watching these incredible mammals determined that this was likely to be a mother and two pups. My first Otters at Brandon, and indeed my first in England! Sadly, no chance of any photographs due to the light so I've posted a library image of some I took earlier this year in Canada!
Posted by boatbirder at 18:08