With my birding time limited over the past several days I've taken every opportunity to keep up to speed with both the local and national birding news. It's exciting times of course at the moment with the real spring imminent and of course so too the arrival of our amazing summer visitors.

I've noticed that Sand Martin numbers have now reached double figures and a few have also been reported more inland. The first Swallows have also been spotted in coastal areas along with a couple of Osprey and Northern Wheatears. Unfortunately the great British weather has given a slight kick in the teeth to these early arrivals! With temperatures plummeting over the weekend after some recent spring like days you do fear for these gutsy migrants. Martins and Swallows for example rely on airborne insects and of course with the low temperatures (-3C at the marina this morning) these will be hard to find. 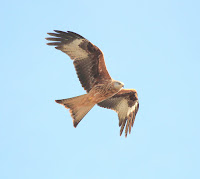 Nevertheless in anticipation I spent this morning at Brandon Marsh constantly scanning for the first Sand Martins but I suppose I was being a little premature, with the current conditions probably blocking any further early arrivals, I did however manage another view of a Bittern in flight from the Carlton Hide. More Waders are now moving inland and during my brief visit to Brandon on Saturday morning I recorded my first Redshank for my Brandon list this year.

Yesterday morning and this afternoon I had to make a couple of visits to London Heathrow Airport and of course any birder who knows the route from the Midlands is aware of the fact that it passes right through The Chiltern Hills. In 1989 a decision was taken by the Joint Nature Conservation Committee to reintroduce Kites to various parts of the UK. Between 1989 and 2004 the RSPB, English Nature and a variety of other partners have been working on a programme to re-introduce Red Kites to a number of sites across Britain, the Chiltern Hills being one of those sites.

The birds have now spread exponentially and today for example I counted an amazing 17 birds in view at one time. I decided on the way back home to leave the M40 motorway and try to get a closer look at these huge birds. The posted photographs speak for themselves but it was a pleasure to spend 45 minutes in the company of these stunning birds.
Posted by boatbirder at 20:22