Saturdays heavy rain had given way to snow flurries when I set off for Holme Dunes first thing Sunday. For those unfamiliar with the site: Holme has a range of coastal habitats including sand dunes, freshwater pools, grazing marsh and saltmarsh. Much of the site consists of natural habitats maintained largely by coastal processes.

With the strong wind whipping up the snow flurries it was impossible to walk and bird against it so I decided to find a decent sheltered spot and hunker down for a while. The pools were mainly taken up by large numbers of Wigeon with a few Teal and Gadwall mingled in, the beach held a selection of Waders battling away against the elements including: Bar-tailed Godwit, Dunlin, Grey Plover, Ruff, Ringed Plover and Oystercatcher. A group of around 20 or so Snow Buntings passed over at one stage followed by a couple of Skylark. Despite exceptional numbers of Gulls there wasn't a 'white-winger' to be found and the only sea duck located was a lone Common Scoter.

After a half hour or so I put my back to the wind and ended up near the Hunstanton Golf Links. Here sheltering within the Hawthorn and Blackthorn was a lone Chiffchaff and a rather bedraggled looking ♂Brambling!

Another look at RSPB Titchwell and here I managed better views of the ♀Long-tailed Duck with the only additions to Saturdays visit being (3) Spotted Redshank and (4) Ruff. I didn't bother going to the beach, it was simply impossible.

A flooded Holkham produced 100's of Wigeon, Greylag Geese, (2) Marsh Harrier and a lone Common Buzzard. Of course the Pink-footed Geese are already on route back to Greenland.

Salhouse next for my customary coffee from the 'man in a van' and with the weather brightening slightly an opportunity to get the camera out for only the second time. Can't say this has been one of my luckiest visits to Norfolk, with yesterdays Snow Buntings nowhere to be found. However, you can always rely on the resident Turnstones to produce! 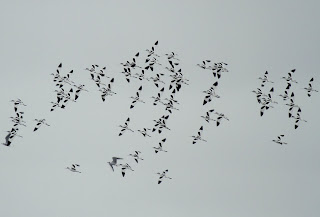 My final stop of the weekend was at Cley, where I managed several Red-legged Partridge in the adjacent fields, (2) Little Egret, another Marsh Harrier and a couple of mad March Hares. Finally, a few shots in the gloom of the many Avocets at Cley, a nice way to end the weekend!
Posted by boatbirder at 18:28