Not So Gloomy Monday!

The day began while having coffee in the dinette when I was alerted to the call of Yellow Wagtail. To my absolute amazement as I opened the blinds two birds were perched on neighboring boats. The first on next doors spotlight and a second looking for insects on one of the fenders a couple of pontoons over, fortunately both birds stayed put while I darted for the camera.

Along the surrounding hawthorn and bramble Chiffchaff, Willow Warbler, Linnet, a dozen or so Goldfinch and a single Lesser Whitethroat. The reed bed produced the usual Reed Buntings, which included several juveniles.

The phone wires were buzzing with at least fifty or so Swallows during my walk and the Pied Wagtail roost, which was just dispersing held will over eighty birds, including another (4) Yellow Wagtails!

A good local day was rounded off later this afternoon when firstly a Red Kite drifted over towards Southam, closely followed by a Peregrine, which the many Swallows seemed to see off, safety in numbers perhaps! Also of note: A couple of juvenile Common Terns. 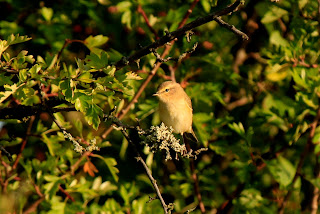 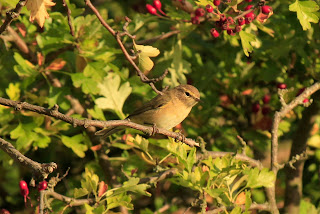 A poser to end! Which of the above is the Willow Warbler and which is the Chiffchaff? Or are they both the same!
Posted by boatbirder at 18:20