❄️ 🌤 6C Monday 12th February 2018 ~ A mid-morning walk at Draycote Water for another look at the long-staying Hawfinch but mainly for a year-tick Tree Sparrow at the feeders. Only three Tree Sparrows, mainly hidden to start, a few Yellowhammers and Reed Buntings ground feeding in the biting wind but patience paid off after a good twenty minutes.

I did intend to complete a full circuit but around 12:30pm the phone lit up with a birdguides sighting. Black-throated Diver at Albert Village again. I'd been hoping for this as I've only ever seen UK ones along the coast and so only an hours drive across to Leicestershire I couldn't really ignore it!

I arrived around an hour later, parking up just offroad at Reservoir Hill and made my way down the track towards the water's edge. In fact, before I reached the viewing screen I could make out the bird roughly towards the middle near the large island. Job done really but I decided to take a walk around the perimeter, in the hope of being able to study the bird a little more and obtain some closer views. 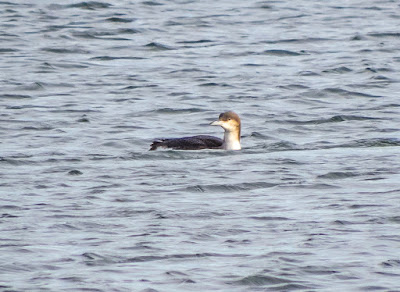 Although the bird never came too close during my stay, lots of dog walkers around and I think it might be half-term in the area I still managed a few acceptable record shots with the Canon SX50!

My BUBO year-list does not currently include American Horned Lark
Posted by boatbirder at 17:09