After my short break this week I hadn't actually planned to do much this weekend but a phone call from Jim Timms Saturday afternoon changed my plans.

Jim was telling me about some Dark-green Fritillary butterflies he'd just been photographing at the relatively nearby Harbury Spoilbank, a small nature reserve managed by the Warwickshire Wildlife Trust. As I had a little food shopping to complete in Southam the reserve is only a further 10-minutes drive.

By the time I arrived the sun had in fact disappeared due to some high cloud but butterflies were still on the wing and thankfully I managed at least six Dark-green Fritillary. There was also a good population of Marbled White, along with Meadow Brown, Small Tortoiseshell, Small Skipper and my first Six-spot Burnet Moths of the year. 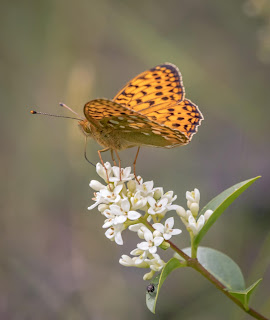