☁️6C Saturday 19th January 2019 ~ Our annual visit to WWT Slimbridge, not every birder's favourite but somewhere Dazza and I both enjoy. Where else can you get close enough to study certain bird species that you'll probably never get to see in the wild?

We arrived mid-morning and despite the weather forecast predicting occasional heavy showers, we enjoyed a completely uninterrupted day, despite it being quite gloomy for the best part. To be honest, it wasn't the best days birding we've had with little movement and a few noticeable absentees, including Ruff and Peregrine. That said, White-fronted Geese (circa 120), Barnacle Geese (circa 80) and Common Crane were all noted, the latter though only producing two adults and a juvenile out on the 'Dumbles.

The Martin Smith hide provided the best and the worst of the day! A Jack Snipe was close in but very well hidden, occasional seen bobbing and out in front on the 'Tack Piece' thousands of birds, which included many Pintail on the pools, plus Golden Plover, Lapwing, Dunlin and around thirty Bewicks. 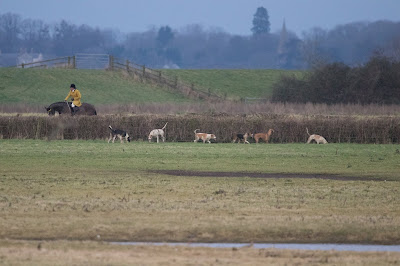 Sadly the day was marred by a pack of hounds, let loose by the barbarians on horseback, which I'm sad to say ran amok throughout the 'Dumbles'. Both Dazza and I were left stunned to see the Fox bolt across the grassland, closely followed by the hounds. Needless to say, not a single bird was left, the thirty or so Bewicks happily sleeping one minute flushed out towards the estuary! In fact, at the 4pm feed, not a single Bewick Swan returned. Unfortunately, the Berkeley Castle Estate owns the New Grounds at Slimbridge, where the Wildfowl & Wetlands Trust is based, and about five miles of the bed of the River Severn. They also retain the hunting rights. This does not, however, excuse this disgraceful disregard for wildlife and activities which are simply banned by law and that you and I know continues unabated!!

☁️6C Sunday 20th January 2019 ~ A visit to some of the well-known birding areas in the Forest of Dean. Sadly, Unlike previous years there are no Great Grey Shrikes or Penduline Tits to see this year so we began at Canop Ponds for Mandarin Duck. Of course, it was Sunday and as you would imagine everyone was out enjoying their favourite pastimes, dog walking, cycling and generally getting the kids to be as noisy and disruptive as possible. In fact, it actually worked in our favour for once, someone was feeding the ducks and in among them eight drakes and six females!

Next stop Park End, where we began at the area opposite the cricket pitch. Immediately there we're six Hawfinch in the treetops, which unfortunately didn't come down to ground level during our stay, probably due to the several parked cars, lenses poking a foot or two out of the windows.

Park End church next and once again several parked cars lenses poking out in the hope that the local Crossbill population would come down to clean off in the rain puddles. Maybe in the week but not a chance today! In fact, the best they probably managed was the gorgeous Nuthatch and several Chaffinches busy scoffing the nuts that the obliging photographers had provided, completely oblivious to the pair of Crossbills perched in the trees a short distance away! We had more Crossbills during our walk into the woods, plus at least three Marsh Tits, Treecreepers and a large flock of Siskin.

We enjoyed another walk, this time around New Fancy Viewpoint with more Crossbills seen but a little early perhaps for displaying Goshwawks? And even if they were displaying they would have been impossible to see in the low cloud and descending mist.

Our final stop of the day was at Wenchford Picnic Area for Dipper, which was mobbed due to both a cycling and children's event taking place, although we did manage to find some of the Mistermen the kids were searching for. I think Dazza said they were Mr Tickle and Mr Sneeze. Notwithstanding we took a pleasant walk along the fast flowing stream and were astonished to find, despite the disruption, a single bird midstream, just beyond the picnic benches down from the toilet block. We had more views of probably the same bird from the bridge just prior to leaving. A very enjoyable but sometimes frustrating weekend.