My first post of 2021 and once again we find ourselves under strict lockdown conditions but this time there are two subtle differences for me. Firstly we are now residing back on 'dry land' in a different country and secondly, unlike the previous lockdown spent on the canal in England during what was a glorious springtime, we're now in the darkest month of January and up here in the north-east of Scotland we'd be lucky to get just over six hours of daylight at this time of year. Also, because of the new restrictions, my almost daily jaunts to the coast are now, unfortunately 'out of bounds'.

Staying positive, there's still plenty of local area's to explore including the nearby River Don, just a mile from the house, the Fetternear Estate, the pools at Dalmiddy Ponds and the hills of Bennachie.
So far during the lockdown, I've managed a number of walks along both banks of the nearby River Don which is running quite fast at the moment due to the snowmelt. During my visits and despite the conditions I've now managed to establish the preferred location of a pair of Dippers.
A short video of my 1st ever singing Dipper.
Needless to say, I've spent lots of time watching and attempting to photograph the birds and yesterday (13th) I even managed to film one singing using my DSLR. A memorable moment, particularly in the depths of January and I can't help thinking I may well have struggled recognising the song if the bird hadn't actually been directly in front of me. 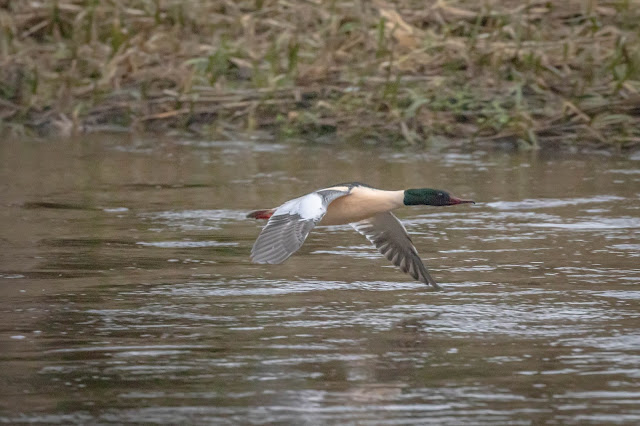 Both Goosander and Goldeneye are both regulars along the river here but despite the habitat, I've yet to record a single Grey Wagtail. In fact, It's been an interesting learning curve since moving north and in particular, the discovery that certain species I was so used to seeing in the Midlands are not commonplace or are even absent from Aberdeenshire. Examples include Nuthatch, Marsh Tit, Willow Tit, Lesser-spotted Woodpecker, Little Owl, Green Woodpecker, Great Egret, Great Crested Grebe and even Lesser Black-backed Gulls, which move south for the winter. Come the summer I'm told that there's more chance of coming across a Blyth's Reed Warbler than a Eurasian Reed Warbler, the latter a bird I've filmed & photographed many times from the boat window!
The hills and tracks around the Bennachie hills provide plenty of good habitat and Crossbills are a regular feature here. I've also inadvertently flushed a few Woodcock during my walks and where the land opens out 1000s of Pink-footed Geese can be found feeding and if your patient enough to search through them you may find a Bean Goose, Snow Goose or White-fronted Goose, sadly only Greylags thus far for me! Whooper Swans pass over on occasions and later in the winter I'm told, the area is known for large groups to congregate along the river nearby, I look forward to that.
During one of my hikes I came across a huge flock of 2/300 Chaffinch and while scanning the birds I managed to pick out at least 3 Brambling, although with the birds very mobile and hard to pin down I'm certain there were more. Bullfinch's are also in good numbers up here, one tree holding at least nineteen birds, my biggest ever count by far. Siskin is also pretty common but Lesser Redpoll is a little more scarce, but they are around. Sadly, this year thus far has not been an invasive year for Waxwings but there's still time.