The final part of my recent trip to southern Spain includes visits to Cantero's Los Arenales and Zapata. Details of both sites can be found HERE or by clicking on the tab Birding Spain at the top of the blog.

🇪🇸 Saturday, September 11th ☀️ 32C ~After the drive up to the parking at Puerto del la Graja, it's always a good idea to spend a little time checking out the rocks, shrubland and old quarry before making the steep walk up to the top. Dartford Warbler, Rock Bunting and Black Wheatear can all be found in the vicinity but during today's visit, I failed to connect with the latter for the first time in over 10 years.

It was a slow and steady walk today pausing every so often in the shade to shelter from 32C temperatures. There are still a few butterfly species on the wing and every so often I'd come across a Wall Brown or Striped Grayling perched on the rocks. A few Common Crossbills high up in the repopulated Pines along with Chaffinch and a small group of Long-tailed Tits.

As usual, I could hear Firecrests and Crested Tits calling for most of my stay and as I reached what is for me the summit I stopped for a while to try for some images.
The high point (around 2,000ft) of my walk is simply stunning with amazing views of the Hoya de Malaga and I usually spend an hour or so here watching the odd passing Raptor, which today included Booted Eagle, Short-toed Eagle and Honey Buzzard. Crag Martins and the occasional Alpine Swift are also regular sightings and today a Peregrine flew so close I could hear the whoosh of the air as it passed by at a rate of knots!
On the walk back down to the parking lots of cracking branches alerted me to two young Iberian Ibex feeding down in one of the ditches, a first for this sight for me. Also of note during my visit Pied Flycatcher, Common Redstart and Short-toed Treecreeper.
🇪🇸 Monday, September 12th ⛅ 28C ~After much needed overnight rain, particularly in relation to the ongoing fire just north of Estepona, one of the worst in living memory I arrived at Zapata in much fresher conditions. Although that didn't last long once the sun began to break through turning things rather muggy.
You can easily drive around the rough tracks at Zapata but since getting Dave's 4X4 well and truly stuck a few years back I prefer to walk. In any case, you obviously get to see a lot more on foot. This is a great place to find Red-necked Nightjar in the spring and early summer but being so late in the year and day to be fair I drew a blank. 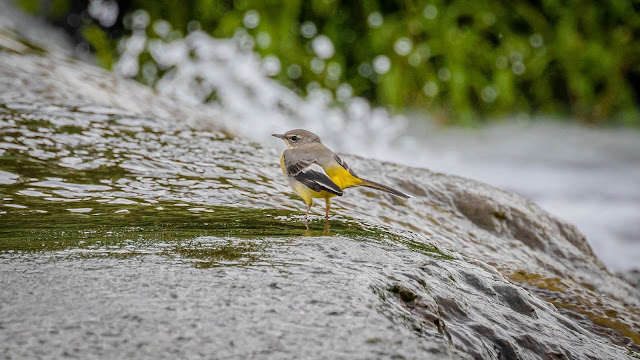 Down at the ford which crosses the Guadalhorce, a Grey Wagtail was enjoying a wash, along with Cattle Egret, Greenshank and Little-ringed Plover which unfortunately I flushed as I approached. While photographing the Grey Wagtail an Osprey and Booted Eagle drifted over, so maybe I wasn't to blame after all. Further upstream a Little Bittern flew out crashing into the reeds further along but just too quick for a photo and both Chiffchaff and Reed Warbler were also noted.
A largish flock of Common Waxbill, blow-ins from Africa which are now well established in Spain and Portugal soon made themselves known but these are very skittish birds and taking a photo can be a little frustrating at times.
A word with a couple of local ringers over coffee confirmed what I'd be feeling during the visit in that it was particularly quiet. I get the impression that like most things this year everything is a little late and species I'd normally record here over the autumn and winter like Bluethroat, Penduline Tit and Stone Curlew have yet to arrive.
Having said that there was still plenty to see with Lesser Short-toed Lark, Woodchat Shrike, Hoopoe, Turtle Dove and at one stage a group of four Wheatear was joined by a Whinchat.
Another excellent visit to Spain, great to be back & see my buddy Dave after so long and I'll be back in November with Dazza so hopefully, we'll catch up with a few noticeable absentee species before the year-end.
More Images of the Visit...