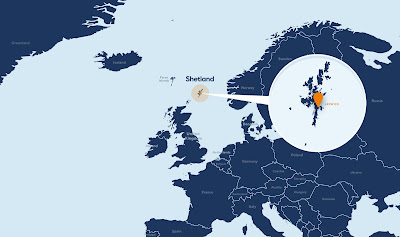 Shetland also called the Shetland Islands and formerly Zetland is a subarctic archipelago in the Northern Isles of Scotland, situated in the Northern Atlantic, between Great Britain, the Faroe Islands and Norway. It is the northernmost part of Scotland and of the wider United Kingdom.
Dazza and I have been wanting to visit Shetland for a while now and in fact, we were due to visit a few years ago but decided to wait until we made our permanent move north. We arrived via Loganair from Aberdeen on Saturday, October 2nd and we'll be returning on Tuesday, October 12th. It was an interesting outbound flight normally an hour or so but due to a strong tailwind, the flight only took 45 minutes. There's the option of taking the ferry but this entails a 12 1/2 hour crossing and so for us, it was an easy decision.
The weather for our first few days has been extremely stormy with wind speeds in excess of 50mph, nothing unusual for the Islands but it did make staying on your feet somewhat challenging. We're based for the first week at Tresta in a comfortable two bedroomed cottage overlooking one of the many voes (sea inlet). For our final three days on the Island, we'll move down to Lerwick staying in airb&b accommodation overlooking the harbour.
Shetland is known as a prime birding destination in the autumn with hoards of keen twitchers zooming around the Islands to see the next interesting sighting. With shetland having little in the way of trees and shrubland, any small copse or plantation is paramount for finding rarities and these are normally surrounded by a dozen or more birders peering in, it's quite surreal when your driving around! Good rarities are often found in residential gardens too and I have to say that most residents seem quite relaxed about birders gazing over their fences. Dazza and I are not what you'd call twitchers per se and enjoy a more sedate and relaxing form of bird watching. However, I have to say that most good finds are within 25 miles of each other and in some stunning locations so it's difficult not to get caught up in the frenzy. We have actually found ourselves joining more twitches than I'd anticipated, although I'm always aware that Dazza, the most patient person I know (she lives with me) finds standing around in a muddy field staring into bushes a little bit odd!
The first twitch we visited was actually just 8 miles from our accommodation at Voe, a Red-breasted Flycatcher, so after organising ourselves at the cottage we headed off for a look in the late afternoon and after finding the bird went for a pleasant evening stroll around the loch.
Sunday, October 3rd  🌦💨13C ~ Today we headed off to explore the southernmost part of the Island, which is basically back to the airport at Sumburgh. As I mentioned earlier we've been battered by winds in excess of 50mph and walking today was challenging but the seas were spectacular! After returning to the car I'd noticed that close by was the Pool of Virkie, where a Semipalmated Sandpiper had been reported so we headed off for a look. We joined a group of some 20 birders hunkered down behind a number of ruined crofts and after a short while the bird could be seen, although at distance.
From here we headed back north and after coffee and cake at a farm shop, one of the few places that are actually open, we stopped to check out a Bonelli's Warbler Sp. at Easter Quarff. No directions were required, there were at least 50 cars parked along the main road and at least 75 birders staring, as Dazza would say, at some trees. Originally this was an interesting one as there was a possibility of this being of the eastern race but as I write it's confirmed as a Western Bonelli's Warbler. This was right up Dazza's street, quickly onto this lovely little bird in a few minutes, a further 15 minutes enjoying the bird a nice chat with some friendly geordie birders before the rain came and we headed off back to the car. If all twitches were like this I could drag Dazza to lots more!
Monday, October 4th 🌦💨13C ~ Another breezy day and after breakfast we headed off to Aith for a walk and to have a look for a Woodchat Shrike, which strangely enough was in someone's garden. We arrived at Whitelaw Road where apparently the bird was in the garden of number 8, imagine having one of these in your UK garden. Just a few birders for this one as it had been around for a few days but we were asked to view from the rear of the house from an adjacent field. The bird was found low in the vegetation to start but after a short wait obliged by flying up to the residents washing line, wow what a cracker!
The next stop was a community woodland at Brae in search of a Red-eyed Vireo, although I've seen them during our trips to Canada and the US this, if seen, would be a UK first for us. This one wasn't going to be easy as the bird apparently was very flighty but was seen on occasions flying across the woodland from an open area in the middle. It was a long wait but we sat hunkered down and did eventually get an albeit too brief a view of the bird low in a tree next to a small burn. We got great views, but I struggled to raise the camera, the strap got caught under my leg and I missed the chance of a photo, gutted but the sighting was more important. 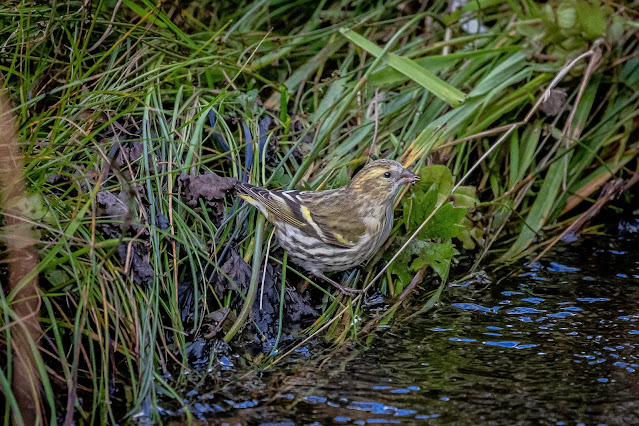 It's not all about the rarities and while here there was plenty of activity with Lesser Redpoll, a small flock of Brambling and lots of Siskin flitting about, occasionally dropping down to wash off their bills in the burn.
A few more images of the Red-breasted Flycatcher at Voe & Western Bonelli's Warbler at Quarff... 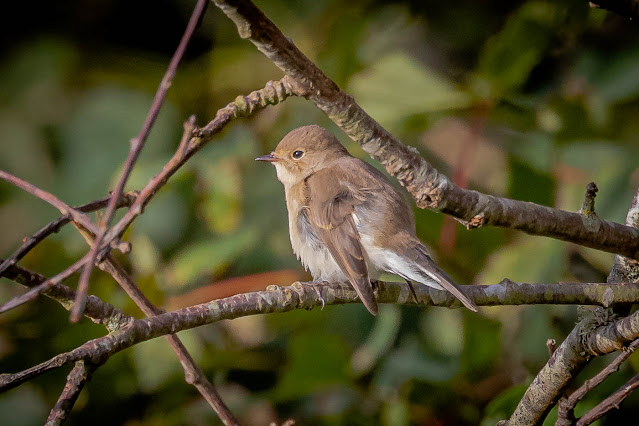