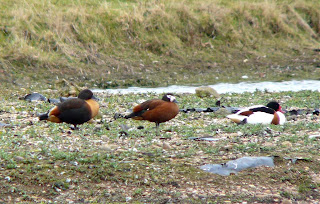 Yesterday I spent my usual Thursday at Brandon Marsh Nature Reserve with the conservation team works party. (view-map)
I arrived at dawn as usual with the intention of getting in some 'birding' before the work started in earnest.
My first site was a couple of Barn Owls looking very striking and eerie in the dawn light. After enjoying the display and continuing on there was the usual dawn chorus of Song Thrush in and around the New Hare Covert, an extremely pleasant wooded area of the reserve which also had a Great Spotted Woodpecker drumming from within. It's great to see so many Song Thrush around at the moment I counted 5.
Passing Newlands, a large bed of common reed phragmites australis, which is managed by the conservation team, as well as spotting the usual Finches, Tit's, Robins etc I encountered a Cetti's Warbler, several of which are often heard and seen on the reserve. Popping in quickly to the Wright Hide which lies to the south of East Marsh Pool there was the usual collection of wintering wildfowl, Gadwall, Shoveler, Pochard, Teal, Tufted etc plus 2 Wigeon a pair of Goldeneye and 4 Shelduck. A selection of 8 Snipe and 2 Oystercatcher were also on view.
In the Swallow Pool which lies at the back of Wright Hide I found Great Crested Grebe and a lone Barnacle Goose in amongst the Canada Geese which were cackling away as usual.
Arriving at the Carlton Hide it wasn't long before I had a stunning view of the Bittern, which I have a great record of seeing on almost every visit here. While I was surveying the surrounding reeds I was disturbed by a sudden whoosh of noise to my right and immediately panned around to get a close up view of the Bittern flying in. From the direction of flight I would estimate that it had been foraging on the River Avon which lies directly behind. I was joined shortly after by other members of the team who also got good views of the Bittern. From the Carlton Hide I also picked up another Snipe, a couple of Little Grebes, now beginning to get some colour and a Water Rail.
During our conservation duties today, see here for a description, we noted a pair of unusual arrivals to the East Marsh Pool (pictured above). After much deliberation we concluded that the female appeared to be a pure bred Cape Shelduck and the male a Cape/Australian hybrid. I'm sure there will be more on these two to come!
After work and tea in the cafe a couple of us decided to go and investigate our new arrivals a little more closely. During our time in the main hide we also noted a couple of Common Gull, and a Lesser Blacked backed amongst the many Black Headed. Around 15.45 a couple of Ringed Plover flew onto willow island. Also observed were Buzzard, Kestrel, Grey Heron and some good numbers of Lapwing, a large flock of what looked like Golden Plover were seen in the distance. Quite possibly the same flock I'd spotted in my previous post!
Shelduck picture courtesy of David Melville
Posted by boatbirder at 10:06