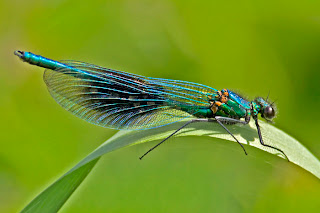 Mid-Summer's day and an early visit to Brandon I arrived at around 6.45am and immediately met up with AW in the carpark. Its amazing to think that this is the longest day and from here on the nights start to draw in, it doesn't seem that long ago I was observing the Siskin and Redpoll in the bare tree canopies!

Back to today and the first notable was a Lesser Whitethroat heard singing in the hawthorn close to the Sheepfield gate, a brief glimpse as it emerged from deep within. A good tour of all the hides ended up with the usual species and the various young, now getting close to adulthood. On the path away from the Wright-Hide we got excellent views of a female Muntjac, which looked as startled as we did when we came across her, AW getting some good photo's.

I could here a Cuckoo calling from over on the West Marsh for most of the morning which I savoured in the knowledge that he will be departing south imminently. Thus far there have been no signs of Cuckoo young on the reserve and indeed no records of the bubbling chuckle of the female.

At Carlton hide I got a good view of Little Grebe young (2) and then later over on the West Marsh more evidence of another brood, difficult to know the numbers as they were well tucked into the vegetation. Another plus during the visit were a couple of Kingfisher, which in an earlier post I had mentioned lack of numbers, good to see more reports and also several reports of young being seen around the reserve.

After the other troops departed myself and Derek, another team member, took the opportunity to have a good look at River Meadow and the Farmfield. On River Meadow we had excellent numbers of Meadow Brown butterfly plus Ringlet, Speckled Wood, Small Tortoiseshell and male and female Banded demoiselle damselfly.

With the lowish cloud dozens of Swift had come down onto the meadow, feeding on the varous bugs and several times we were buzzed by these amazing birds, silent as they wizzed past your ear! At one stage we accidentally spooked a Grey Partridge, my first on the reserve and the first record this year according to JR the official site recorder! Farmfield produced no additions to the species list, with the exception of 6 Goldfinch feeding on the nettles and a Latte in the Nature Centre with Derek ended a really enjoyable visit.