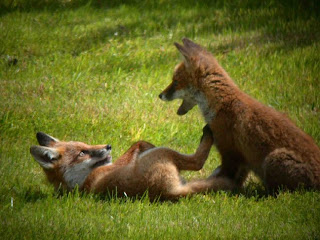 My first full day at Brandon since returning from Canada began at 6.45am with my usual walk through New Hare Covert and the 1st coffee of the day at Wright Hide.
The morning was dank and overcast and so it was really no surprise that by the time the coffee met my lips nothing out of the ordinary had occurred, in fact it was extremely quiet apart from a Cuckoo calling on Sheep Field! Things did brighten up however by the time I arrived at the Main-Hide with a Little Egret on River Pool and Green Sandpiper on Teal.
Although this is my first summer at Brandon it's plain to see that the breeding birds success rate for this year appears to be the best for sometime. In fact having discussed this with other long standing team members over coffee, that fact was confirmed. As we went through the successful breeders the numbers sounded even more impressive with Oystercatcher, Redshank, Little Ringed Plover, Great Spotted Woodpecker, Lapwing, Coot, Common Tern and Sand Martin to name just a few. In fact the Sand Martin is probably the real bonus for us this year as it's the first time we've had nesting birds within the artificial structure, first installed over 3 years ago. I reported in an earlier post the predation of one of our Great Crested Grebe nests but was happy to see that another pair have succeeded in raising a single chick, which being carried on the mothers back this time last week, was actually sitting proudly in the original nest.
A slight concern this year for me, although not to put a dampener on things, is the lack of Kingfisher sightings, as yet unexplained. That said I did see my first at the reserve for several weeks as one came shooting past the River Pool Hide earlier.
After lunch with PB at West Marsh and a visit to the Nature Centre to update my whiteboard I took a walk alone up onto Farm Field in the usual hope of seeing something different. I'm delighted to say that it came, not in the form of a good birding spot but just as pleasurable. As I rounded the path from the Tip area my attention was drawn to what I first though was a Muntjac Deer crashing through the reedbed, only to be surprised by an adult Fox and 2 cubs who were happily playing, oblivious to my presence, just on the peripheral. I watched them with delight as they played for a good 10 minutes before disapperaing from view, a great finale to my day.
It's off to France this coming weekend for a family visit so lets hope I can find time to get some birding in!
Posted by boatbirder at 17:11