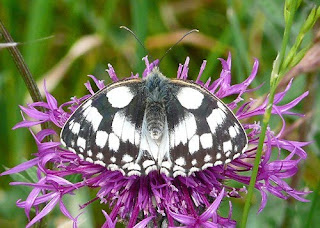 With the summer comes more opportunities for cruising aboard my home and so after a well earned break from intense birding, and after a few jaunts down the Oxford and Grand Union Canals, I'm now back into the swing. A wedding which I attended this weekend at Goring-on-Thames was a perfect restart with more Red Kites you could shake a stick at, nice to be back in my old stomping ground too!
A return to Brandon Marsh today and after a good tour of the reserve and a catch up on the news I'm now suitably knackered. Four Green Sandpiper on River Pool this morning along with Redshank and Little Ringed Plover adults and young was a good start, plus two broods of Tufted Duck on East Marsh Pool along with two Oystercatcher and several Common Tern chicks. The River Pool Hide was a cauldron of debate first thing, something I've really missed recently, as the possibility of Garganey in eclipse on the pool was discussed. I certainly wasn't having any of it and without going into too much detail the team settled on female Teal, although I have to say it came close.
After lunch a Hobby came hunting over East and Central Marsh and I'm also delighted to see more in the way of Butterflies, Dragonflies and Damselflies, although numbers are well down on last year. Spotted Orchids are plentiful all over the reserve and we now have three Bee-Orchid, although I suspect a rabbit has almost devoured one. A good search of the known Butterfly habitat produced at least a dozen Marbled White (pictured), only first discovered in these numbers last year, plus plenty of Ringlet. Also seen were Large and Small Skipper, Comma, Speckled Wood, Red Admiral, Meadow Brown, Large White and Small Tortoiseshell, more encouraging numbers than a few weeks ago.
The overnight rain seems to have had an effect on the Frog population with good numbers of Froglets on the paths, so watch your step if your visiting soon. Speaking of rain, with the poor amount of rainfall more recently Teal Pool is looking very dry and the Avon is currently running very low, although Teal and River Pool are still the best places to see Waders, the hope is to try and get more water onto Teal Pool soon. Kingfishers are once again beginning to appear more regularly on the perching posts at Carlton, several young birds have also been recorded.
Posted by boatbirder at 15:20