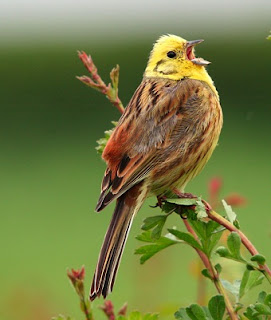 Nothing too exciting happening on the birding front at present, mainly the reason for the lack of posts more recently. Lots of young around the marina though with our six Mute Swan Cygnets now venturing farther afield. I spotted them almost at Braunston the other day while out on the canal, by the time I arrived back at the marina later in the evening they were already basking on the bank! The wife is also having problems with the very territorial male who keeps attacking the dingy each time Dee pops out for a row. However, she seems to have now compromised with him by taking out several rounds of bread each time and keeping him occupied with food.

Reed Bunting, Reed Warbler and Sedge Warbler can also be seen within the surrounding reed beds, but my favourites are the young Little Owls which can frequently be seen and heard in the nearby Oak Tree. Buzzards have also had a good year locally with several seen daily riding the thermals. A Barn Owl has recently appeared too and I've spotted him quartering the adjacent fields on three occasions.

One particular bird which seems to have done very well this year is the Yellowhammer (pictured), on a recent cruise to my usual mooring spot near Flecknoe I counted no less than fourteen birds on route. While moored at Flecknoe last Tuesday morning having breakfast on the towpath a young Raven came circling over before heading off to the East, which was a pleasant surprise.

More cruising this weekend and on the agenda is a good look at the local Butterfly population. Last year the highlights were Marbled White, found in a local meadow and White Admiral found in a small copse, the first time I've had one of these locally.
Posted by boatbirder at 20:03