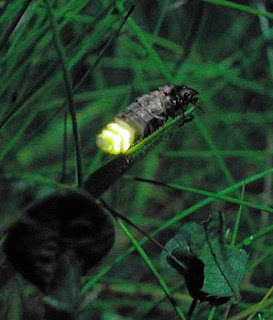 A few things to report on since my last post, starting with a visit to Brandon Marsh last Friday evening in search of Glow Worms (pictured)!

Dee and I joined Anne and Paul Norman at Brandon around 8.30pm, a little early for Glow Worms, but allowing us a couple of hours birding beforehand. Anne and Paul have a good track record in finding these amazing little creatures. However, It was pointed out that we were right on the peripheral of seeing them, as June and very early July appears to be the best time for viewing, notwithstanding we had high hopes and good company.

A visit to the hides produced a quartering Barn Owl at Carlton, along with a single Hobby first seen across Sheepfield, and then later as an eerie silhouette perched in the large dead tree. Two Green Sandpipers and Kingfisher were the other highlights of the evening. Around 11.30pm the light was sufficiently gone to begin our search for Glow Worm and I'm delighted to say that we managed 4 of these incredible creatures, mainly along Bee-Bank, which for information is the bank that runs along near the golf course, a first for us at Brandon and something high on our list for next year, our thanks to Anne and Paul.

Today was my usual Tuesday visit to Brandon and on my normal route to the hides I'd picked up a single Oystercatcher flying across the golf course, closely followed by five Shoveler in flight, plus in the gloom across Newlands I could make out the figure of a Hobby perched in the large dead tree on Carton. After recent rain it was good to see at least some water on Teal Pool and In fact Teal Pool produced the best Wader count with three Little Ringed Plover and two Green Sandpiper. A Common Sandpiper was also seen on East Marsh Pool flitting across from island to Island and around 12.15pm, while having lunch in Big Hide, a Little Egret dropped in for around a half hour before being dislodged by the bombing Terns.

A few of us decided to go in search of yesterdays reported Purple Hairstreak Butterfly (first thought to be White-Letter Hairstreak) and after a good search of the reported area we managed to find a single specimen (Purple Hairstreak) perched on top of the Thistle, another Butterfly first for me at Brandon. Good numbers of other species today too with counts of Red Admiral, Comma, Brimstone, plentiful Gatekeeper, Peacock, Large Skipper, Small Copper, Large and Small White and Green-Veined White. Almost another first as we reached the lower carpark with Jeff Rankin reporting a White Admiral which we missed by minutes!