Arriving Saturday evening at our cottage in the Lincolnshire Wolds, where we’ll spend the next week, Dee and I decided to spend our first day at Donna Nook on the Lincolnshire coast, which boasts a large population of breeding Grey Seals.

﻿﻿Grey Seals in Britain make up around 40% of the worlds population and are found mainly on exposed northern and western coasts. Every autumn they congregate at traditional breeding sites, the timing of pupping varies around the coast from September through to November.

The largest gatherings of breeding Grey Seals normally occur on uninhabited islands in the Hebrides and Orkney in Scotland. Pupping on sand banks or sandy beaches is unusual, which makes Donna Nook on the east coast a very rare and spectacular place to see them. Even more spectacular when you consider the fact that Donna Nook is also an RAF bombing range during the week! 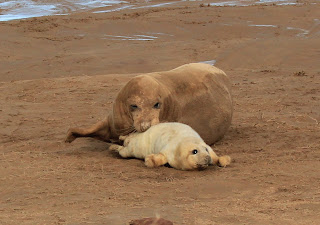 Dee and I arrived at around 11am and this being our first visit we were quite surprised to see so many visitors and ended up parking in the overflow car park. A quick hop over the sand dunes and you’re suddenly confronted with the amazing sight of Grey Seal bulls, cows and pups within feet of the controlled fenced area. It’s an absolute delight seeing the newly born pups this close up, some only days old, and I can highly recommend a visit.

We eventually dragged ourselves away, two memory cards later on the camera and enjoyed a very bracing walk north along the sand dunes. Unfortunately the tides were not in our favour but there was still plenty of birding on offer.

Large flocks of Brent Geese, excellent numbers of Shelduck and Redshank, plus what I suspect were large numbers of Dunlin and Knot too far out to identify. Curlews were also in good numbers and Skylark and Meadow Pipit were a constant. At one stage a large Starling flock suddenly took flight as a fully adult Hen Harrier (ringtail) came in from across the dunes. Dee managed to fire off a few distant shots with the camera, the best of which is posted.

A chat with a couple of local birders had us on the lookout for Snow Bunting and a reported Cattle Egret but we bombed on both. We did however manage a superb flock of around 40 or so Tree Sparrow, along with Yellowhammer, Linnet and Reed Bunting. Also seen on our walk were: Pintail, Lapwing, Golden Plover, Kestrel, Common Buzzard, plus a lone Pink-footed Goose.
Posted by boatbirder at 16:10