Dee and I decided to take advantage of the extended weekend and headed for her parents house in France, landing in La Rochelle Saturday morning at around 9am local time. After meeting up with Dee's mum Susan, who'd kindly driven the two hours to the airport from her home in Sainte Radegonde, we enjoyed a nice breakfast overlooking the harbour.

Having left the UK in heavy rain and a chilly 10C it was a pleasant surprise to be sat in glorious sunshine and a balmy 26C. Dee and Susan had done some prior research in relation to our visit, in particular the two hour drive back to her parents and had come up with an intriguing stop off on route at a "Park Ornithologique" called Les Oiseaux du Marais Poitevin.

A winding path takes you through seven hectares of wild marsh and there are also a number of places to stop and just absorb this amazingly diverse habitat. On arrival it was obvious that we'd stumbled onto a little gem, with Nightingales singing, Golden Orioles calling and Turtle Dove purring it was a dilemma on just where to Begin. One of the other bonuses was that a lot of the paths were tree lined and with the temperature now touching 30C this was very welcome indeed.

The woodland areas had Redstart at least 3 Nightingale in song but despite getting several good views I never managed any decent images. Same too of the Golden Oriole but to be honest I was just happy to get a good look. The reserve also has a number of canals running through with several larger bodies of water and here Shelduck, Ruddy Shelduck, Night Heron, Egyptian Goose, Cattle Egret, Little Egret, Glossy Ibis, Purple Gallinule and a pair of Garganey were the best of the bunch.

A variety of other species were on offer around the reserve which included Scarce Swallowtail Butterfly, Four-spotted Chaser Dragonfly, a very active Hedgehog plus several Avocet, Oystercatcher and Black-winged Stilt, but the real surprise of the day was a stunning Stone Curlew, which despite its shyness offered a number of amazing photographic opportunities which I accepted with pleasure! 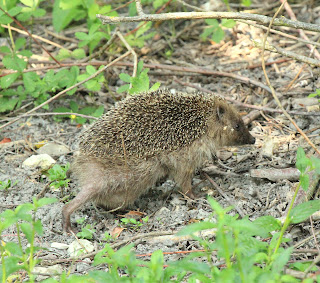 After a stop off for lunch we eventually arrived at Dee's parents house in Sainte Radegonde at around 6pm. After enjoying an excellent barbecue later in the evening, where a nesting Black Redstart kept me well distracted, we were treated to a stunning thunderstorm, the pyrotechnics had to be seen to be believed but I can't remember the last time I saw a storm of that magnitude!
Posted by boatbirder at 12:45