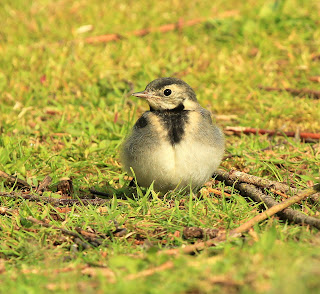 Another weekend another deluge and another poor showing of Butterflies and Odonata at Brandon this weekend. However, the most frightening thing is that from here on the nights begin to draw in! But enough doom and gloom and time to concentrate on the good stuff and to be honest the past several days haven't been too bad at all.

One of the highlights locally occurred when I popped outside to secure the ropes on Friday afternoon as three Whimbrel were overflying the marina heading east, great timing. Another positive from a local perspective was my first sighting this year of a Kingfisher, when I noticed one zooming through the moorings yesterday evening. 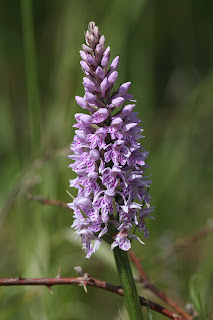 Two visits to Brandon Marsh over the weekend and I can start with some good news regarding the Barn Owl young I reported on within my post of May 29th. After a few concerned texts and emails regarding their well-being (if you recall one of the parents was taken by a fox) I can tell you that a welfare check took place this morning managed by Jim Rushforth and I can confirm that all 3 Owlets have fledged successfully!

During my Saturday visit, were I missed an unprecedented flyover of 9 Raven by arriving late, it was necessary to check out some of the off-track areas of the reserve and during my tour I was amazed to find that the place is literally awash with Common Spotted Orchid, I stopped counting when I reached 50. Having said that please do not venture off the main tracks at Brandon as there are plenty to be found within the public areas. I can also tell you that for someone who works the reserve and knows it extremely well there are some newly formed dangerous deep water areas!

Saturday morning also produced ♂Cuckoo, Hobby and a calling Lesser Whitethroat at Carlton Hide. There are still lots of young birds to be found and I was fortunate enough to be able to take several images of a young Pied Wagtail near the 'Tip' area, being ably attended by both parents. The only Butterfly noted during my visit was a lone Speckled Wood in New Hare Covert and remarkably my first young Grass Snake of the year.

Today I arrived a little later than normal but was fortunate enough to see a rather pristine looking Black-tailed Godwit which arrived on East Marsh Pool mid-morning. The usual Ringed and Little-ringed plover were also recorded along with 6 Oystercatcher, including the 2 recent juveniles. There was also evidence of Grey Wagtail breeding on the reserve when an adult male and youngster were seen on Goose Pool.
Posted by boatbirder at 15:28