☁️23C Monday 4th September 2017 ~ Just back from our first cruise out since June, mooring up along our favourite stretch of Grand Union Canal near Flecknoe last Thursday. This particular spot offers lots of opportunities to cycle the uncategorised and gated roads, walk and even explore the old London and North-Western Railway branch line, which ran from Weedon to Leamington Spa until its closure in 1963.

For the most part, the weather was kind, apart from yesterday when a weather front brought through wet and windy conditions. As you would imagine the canal has been pretty busy with lots of holiday traffic, hopefully easing as the kids go back to school.

This is a very rural spot with few houses nearby and in fact, there are no locks to contend with from our mooring at Napton through to Braunston, so it's a leisurely cruise. The local farmers have been busy with their crops and this gives a good opportunity to look out for Hares, Wheatear and Yellow Wagtail on the newly ploughed fields. 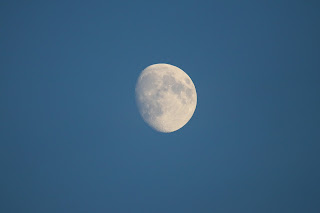 On Friday evening a gorgeous moonlit night offered a chance to BBQ, sit out, watch the local Daubenton's Bats skimming the water and just listen! This yielded a Tawny Owl close by and at one stage the unmistakable call of a Whimbrel, which flew through, the calls dissipating as it moved further away!

Saturday evening Dee and I took a walk from the mooring through to Sawbridge Road along the uncategorised road that leads from bridge 101. Several Yellow Wagtails were among the odd cow herd, plus Red-legged Partridge and a distant Wheatear on the ploughed fields, but the surprise came when out of the blue a young, in fact almost adult, Cuckoo suddenly flew along the treeline. We watched the bird darting between the trees before being spooked by a Kestrel. Another feature has been the Ravens, which can be heard and seen constantly and appear to have nested along the old railway line, eleven birds in flight over the boat was an amazing count on Friday.

Other highlights included a gorgeous sunset on Thursday evening, a Hobby fly past and more opportunities to photograph Spotted Flycatchers!