☁️11C Wednesday 15th November 2017 ~ Back at Brandon Marsh for a couple of hours yesterday, where I was just in time to see a few of the volunteers pulling the second tern raft out of East Marsh Pool. Both rafts are due for refurbishment before next spring. The consequence, of course, was that the pool was almost devoid of wildlife, so I concentrated on the woods and tracks.

Best of the visit, (5) Snipe overhead, 20+ Siskins, Treecreeper, (2) Nuthatch and plenty of winter thrushes. From a photographic opportunity a couple of obliging Redpoll along the central marsh path!

Today I spent the morning on the patch and was pleased to see that despite my recent absence it was still yielding well. I was actually gutted when, at Napton Church, I flushed a couple of Hawfinch which were perched up on one of the yew trees at the bottom of the churchyard. They were gone in a flash and I never managed to relocate.

I had better luck at Napton Reservoir, where a Pintail was mingled in with several Mallards and the lone Bearded Tit, which was found while I was in Spain was showing incredibly well. While here a Kingfisher flew low over the water, a Water Rail was heard calling and a good passage of Fieldfare and Redwing over. 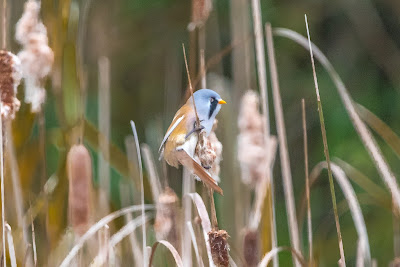