⛅️7C Sunday 14th April 2019 ~ We took a drive further north up the coast today, heading to Rattray Head to begin with before moving on to RSPB Loch of Strathbeg.

On the road down to Rattray, we parked for a while at the remains of the old St Mary's Chapel, this gives excellent views over the south end of the Loch of Strathbeg. Apparently, it's very good for Corn Buntings too but a fifteen-minute search of the area drew a blank. A large flock of c200 Golden Plover, two large skeins of Pink-footed Geese, plus 18 Curlew, Linnets, Meadow Pipits and Skylarks were noted before moving on.

Parking at the Lighthouse Cottage which in itself can be good for migrants in Spring and Autumn we had a quick search of the surrounding gorse, locating a pair of Stonechat, before following the track through the dunes down to the beach. 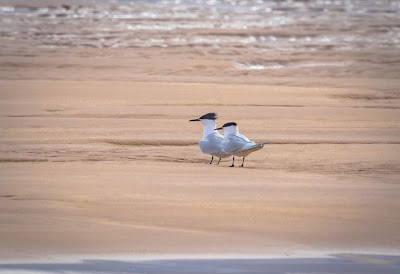 The lighthouse had plenty of Shag roosting and with the tide receding over 100 Sand Martins were feeding over the water. There was a constant passage of Sandwich Terns, some pausing occasionally to rest on the beach and during our long walk, at least two Arctic Terns also passed through. Plenty of Eiders offshore, a smart pair of Long-tailed Duck and several Gannet were diving, brought closer in by the stiff south-easterly.


Waders included many Oystercatcher, along with Ringed Plover and Sanderling. Further out passing Razorbill and Guillemot, with a constant flow of Kittiwake and the odd Fulmar. Gulls were represented by Black-headed, Common and Herring.

At RSPB Loch of Strathbeg, we decided to only visit the Fen and Bay Hides which are accessed via the old airfield, were on the odd Sunday you bizarrely find yourself driving through the local stock car race meeting, which thankfully we've navigated before.

The Loch was pretty quiet with the only notables a single Whooper Swan, a group of 6 Wigeon and 4 Teal. The highlight was undoubtedly the huge dog Otter which was constantly feeding during our short stay.
Posted by boatbirder at 23:59