⛅️17C Thursday 18th April 2019 ~ Despite spending the majority of our time here in Scotland preparing our new property for rental, along with the inevitable waiting around while the electrician and gas people do their thing, we've still managed to get out and about on a daily basis.

Last Thursday (18th) we decided to head up to the northernmost part of Aberdeenshire, even crossing into Moray at Cullen, which if you didn't already know is famous for Cullen Skink, one of my favourite soups.

We're determined to discover as much of the surrounding coastline as possible before we make the permanent move up here next year. We began at Portsoy, around an hours drive across country from our property. The fact that this particular area is also an excellent place to see White-billed Divers, which regularly moult offshore between March and May, it was a great place to start. It's actually a beautiful spot with a remarkable 17th-century harbour and like most areas we've visited thus far was extremely devoid of people.

The harbour offers great opportunities for sea watching and along with the usual selection of Fulmars, Kittiwakes, Razorbills, Guillemots and Gannets offshore there were a half dozen Red-throated Divers in various plumages. After a time, another birder on the hunt for White-billed Diver appeared and while Dazza headed off rock pooling and checking out the local Shag nesting area we spent time scanning. I'm glad to report that after what seemed an age I finally dropped onto a single bird, someway offshore but nevertheless a single White-billed Diver! Having seen the species in Oregon in 2015 this was, in fact, a UK first for me so some cause for celebration. Simon, the fellow birder I'd met and spent a few hours with was also delighted having failed on three previous attempts and despite having a four-hour journey home by public transport remained in good spirits.

In addition to the above other notables of the day included Corn Bunting at Findlater Castle, Sandwich Terns and two Black Guillemots at Cullen.

A few of Dazzas' photos 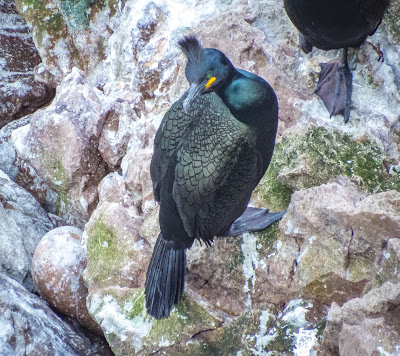