⛅️20C Wednesday 21st August 2019 ~ A day out at RSPB Frampton Marsh with a few of the Brandon Marsh regulars on Wednesday and for most the main objective was a year-tick Buff-breasted Sandpiper plus another chance to view the now long staying Long-billed Dowitcher. For me, although I do enjoy the occasional 'twitch' it was more about a day out at what I believe is one of the best-managed reserves in the country!

From the car park distant views of a Great Egret and the pools along the walk from here up to the seawall held huge groups of Black-tailed Godwits in various plumage, plus smaller numbers of Ruff, Ringed Plover, Avocet, Dunlin, Green Sandpiper, Golden Plover and even a couple of Turnstones. Just before reaching the seawall, flyover Whimbrel and Greenshank and then the arrival of ten Spoonbills.

At the top of the seawall steps a year-first Clouded Yellow butterfly flashed by, plus a distant Whinchat along the far end of the fence. Further down the bank, a group was gathering to oversee the area where the Buff-breasted Sandpiper had been spotted earlier, which we eventually joined. After an hour searching for the Sandpiper, at this point without success I decided to go walkabout and leave the guys to it. Patience for me is not a virtue and I'd much rather spend my time exploring. I took a circular route anticlockwise, stopping occasionally to check out the saltmarsh.

Just below the bank at least thirty Yellow Wagtails, mostly juvenile were foraging among the grazing cows. A Marsh Harrier passed and a low flying Sparrowhawk caused havoc and after perching briefly on a fence post departed without prey. A surprise was a single Brent Goose on the saltmarsh, which if memory serves is an injured bird sadly unable to join its mates for breeding along the arctic coasts. Four Painted Lady butterflies, Common Buzzard and Common Sandpiper before I descended the steps at the north end of the seabank.

At the bottom of the steps near the path which leads along towards the 'East Hide' several passerines were feeding and taking shelter from the now brisk breeze. In among them were Blackcap and some striking almost yellow Willow Warblers, plus Chiffchaff and a gorgeous looking Lesser Whitethroat.

Lunch in the '360 Hide' produced some close-up views of Ruff and Curlew Sandpiper before I made my way back to the 'sandpiper watchpoint' along the seawall, where the bird had shown well enough for the guys to be happy with the 'tick' but had naturally gone AWOL once again just prior to my return. The Long-billed Dowitcher did show well for a short while too, which I did see, along with a single Knot, at least seven Spotted Redshanks and a Garganey were also observed.

Back at the visitor centre before departure, a Weasel darted across in front of the main window and some great views of a Wasp Spider, a reserve first and apparently the most northern record in the UK since 1992. 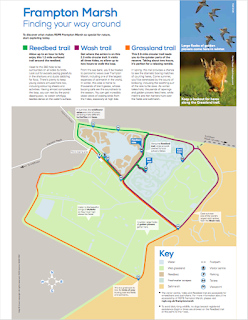 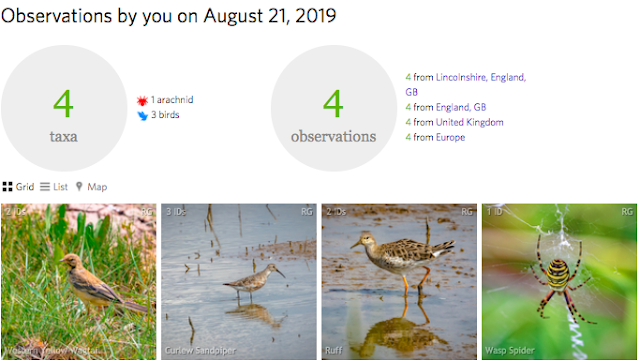