⛅️18C Monday 12th August 2019 ~With a small lens issue to resolve, I had to pop over to Skears Photographic in Northampton this morning. Thankfully, my problem was solved pretty quickly and this gave me an excellent opportunity to pay a short visit to the nearby Summer Leys Nature Reserve just a short drive away.

Although things were generally quiet around the pools and wader scrape a Great White Egret was showing exceptionally well from the Pioneer Hide. Only other birds of note during my brief visit were a Common Tern, Ringed Plover and Little Egret.

Back on the local patch in the afternoon, I had a stroll around Napton Hill to see if I could connect with a reported Common Redstart. The Hill is a good place to see Redstarts and Spotted Flycatchers in the mid to late summer and it was good to catch up with probably the same four Flycatchers I'd photographed ten days ago.

These birds are remarkably obliging and were happy to just let me sit close by photographing them while they went about their business.

However, the Common Redstart was a little less showy and only came close enough for me to take a number of records shots. 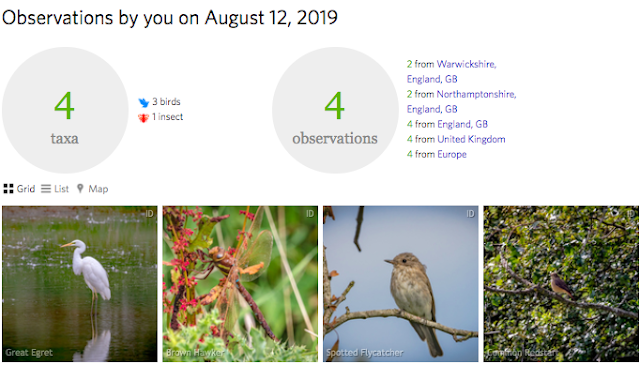