What an extraordinary week it's been for us all!! Wednesday I had a planned trip to the Brecklands in Suffolk organised along with three other Brandon regulars and after some thought, we all decided to go but that this would be our last venture out as a group for the foreseeable future. Another casualty of the pandemic for me and my wife Dazza is the decision to cancel our planned trip to Oregon in May, we decided to act before the inevitable cancellation of our flight with Virgin.

Despite rain back in the midlands for most of the day our trip to Suffolk on Wednesday was dry if not overcast. We began at Cavernham Heath National Nature Reserve, where the highlights were displaying Stone Curlews, many Stonechats, Yellowhammers, Skylarks and three Northern Wheatear. Other notables on the day included Red Kite, several Buzzards, Red-legged Partridge and a couple of Grey Partridge. We had hoped for Woodlark but despite our best efforts, there was no sign. A worrying trend for the site as during last years visit only a single bird was found.

A short drive from Cavernham Heath is Santon Downham an area of Thetford Forest that borders Norfolk and Suffolk, running alongside the river Little Ouse. It was our first visit to this particular site which is renown as a good place to find our sort after Woodlark. Grey Wagtails and Lesser-spotted Woodpeckers also breed here along the river.

We managed two Woodlarks during an enjoyable walk, along with Grey Wagtail and a female Brambling, the latter feeding high in the pine canopy with a group of Chaffinch.

On route home a stop at RSPB Lakenheath and a quick search for a reported Garganey, which proved fruitless.

For the remainder of the week a few early and isolated visits to Brandon Marsh in search of spring migrants, noting my first Little-ringed Plover of the year on Thursday morning. Worth noting too that sadly the trust has put a block on all voluntary work on the reserve, so its all birding during any future visits. 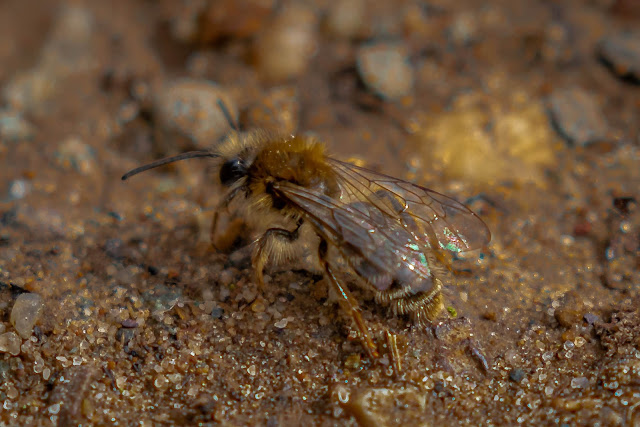 On Friday and away from the birding at Brandon it was interesting to come across a group of Clark's Mining Bees burrowing away near the Baldwin Hide, an annual event and always fascinating to watch.

Finally, a walk around Borough Hill, Daventry on Saturday afternoon with Dazza for some fresh air produced a Northern Wheatear on one the many concrete pylons.

**Extraordinary times indeed: with news today (Saturday) of two Common Cranes flying directly over Brandon Marsh, a first for the reserve. What an amazing sight it must have been for Peter Cox and his wife Julia, I have to say I'm a little envious!