☀️ ☁️ 20C ~ Wind ↘NW@10mph Wednesday 9th September 2020 ~ A less humid day with a sunny start becoming overcast. The south-westerly wind from yesterday had backed to a north-westerly today.
A mixed bag at Brandon Marsh this morning, the highlight of which was a ringed Willow Tit feeding around the Carlton Ditch. Brandon has some great habitat, particularly around the Carlton hide, for these sadly declining species and it's great that were managing to cling on to a small population. 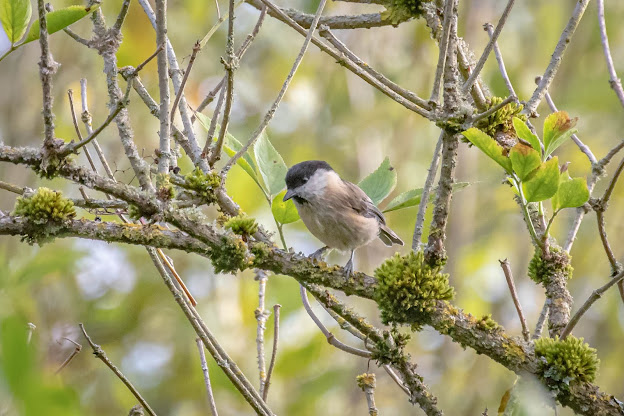 East Marsh Pool was a little quieter than yesterday with a Common Sandpiper, (2) Green Sandpiper, (3) Snipe, single Little Egret & (5) Wigeon. At least three Kingfishers were chasing around the pool for most of the early morning, fascinating to watch, plus a constant flow of Swallows with at least (6) Sand Martins passing low over the water. A Water Rail made its usual dash across the front of John Walton hide and similarly a Cetti's Warbler shortly followed.A walk around the rest of the reserve produced a small flock of (16) Siskin over the 'Tip' area and while at Carlton hide earlier a single Lesser Redpoll overhead, my first for this autumn. Double figure Blackcap, if you can find ripe Elder you'll find a Blackcap! Chiffchaffs are still in small numbers, two actually singing and a juvenile Goldcrest was also noted at one stage. The trust was grass cutting around farm field during my walk, with (3) Green Woodpeckers taking advantage, the tractor likely dislodging the odd Ants nest.
Posted by boatbirder at 18:38