To celebrate what would have been my mums 100th birthday (sadly she passed away just a few years ago) Dazza and I spent a long weekend around Liverpool and the north-west. Lots of walking, a little birding and some fine dining!

During our stay, we spent a morning at WWT Martin Mere situated in Burscough on the West Lancashire coastal plain. Currently, it's a bookings only system to visit but all hides are open and it seems well organised during the current pandemic restrictions.

As you'd expect at WWT there was a good selection of common wildfowl on the pools and during our visit, plenty of House Martin were busy feeding over the water, along with the occasional Swallow. An added bonus was three Swift, a nice September sighting for my records. Raptors included a Marsh Harrier, Peregrine and Sparrowhawk. Four Whooper Swans, two of which flew in during our stay were a bit of a surprise, which at this time of year could easily be confused as early arrivals but the locals told me that these particular birds choose to remain all year-round.A selection of waders was also noted and included (2) Ruff, (4) Black-tailed Godwit, Snipe and Common Sandpiper. A nice find and in fact year-tick was a single Tree Sparrow, a small population do reside here apparently. 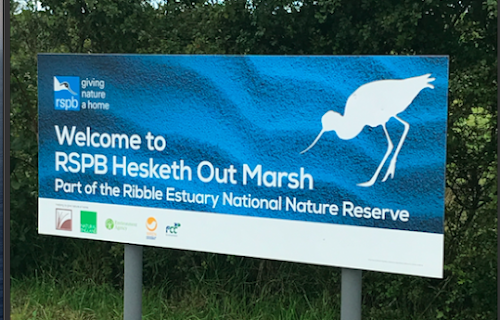 A short drive from Martin Mere is the relatively new RSPB reserve at Hesketh Out Marsh. First restored in 2007 as a saltmarsh the 2nd phase was completed in 2017. Dazza and I enjoyed a long walk from the car park along to the River Douglas (Google Map HERE).  The weather was for the most part overcast with a stiff north-westerly breeze but it remained dry during our visit. 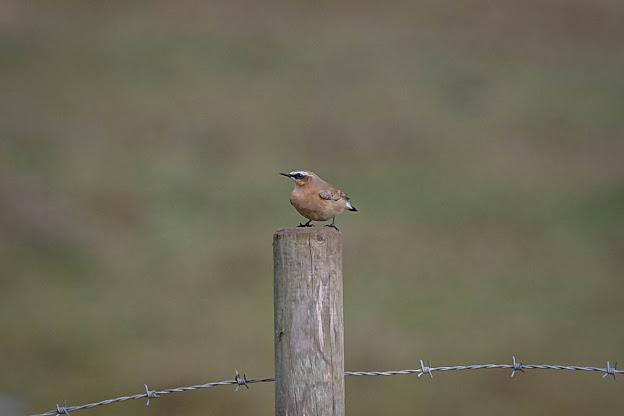 The only half-decent photographic opportunity at Out Marsh was a Wheatear which suddenly appeared on a nearby post, most other sightings were mostly scoped views at distance. According to reports, the previous day to our visit had recorded over thirty Curlew Sandpiper but today we only managed to locate just two birds feeding in the margins. Other sightings included: Little Stint, Dunlin, Redshank, Greenshank, Curlew, Ringed Plover and many Snipe, including a flyby flock of over 30 birds. Double figure Little Egret and three Great Egret, plus what seemed a constant movement of Meadow Pipits.
A few more images taken during the weekend.