Living just 15 miles from the coastline I've become quite accustomed to waking on a summer's morning to low clouds and the occasional sea harr. When this happens I usually head into the Cairngorms where just a 35-minute picturesque journey often brings you into cloudless skies. It was just that when I arrived at Muir of Dinnet NNR around midday.
Since moving here last year I've been on the lookout for Dragonfly 'hotspots' and thus far the boardwalk on Parkin's Moss at Muir of Dinnet seems to offer the best opportunities. Right now it's the height of Odonata activity and I spent an enjoyable hour pacing the boards.

There are still Four-spotted Chasers on the wing, which caught the eye immediately, as did a single Golden-ringed Dragonfly, which didn't linger but by far the most active were the Black Darters. With the hot conditions most were constantly on the wing but with patience one or two would drop down for a brief respite.
Another Dragonfly I was keen to register today was the Common Hawker and I did manage a few sightings but on each occasion, they were constantly 'hawking' and frustratingly refused to land. 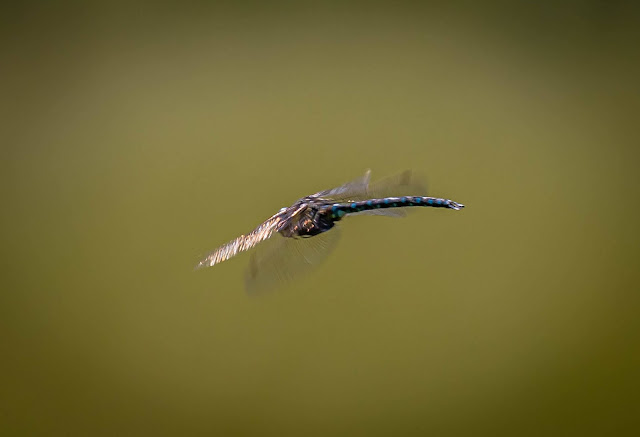 However, my attempts to capture one in flight actually paid off, much to my astonishment!
As for Damselfly's, the Large Reds seem to rule the roost here with the occasional Common Blue but then for me, these are outclassed by the metallic green and powder blue eyes of the Emerald Damselfly!
Despite the conditions, there were just a few Butterfly encounters today which strangely did not include any Fritillary. On the other hand, Small Heath was high in numbers with Small Tortoiseshell, Ringlet, Green-veined White and Meadow Brown. Day flying moths included the above Mottled Beauty.
Posted by boatbirder at 22:23