🌦11C Saturday 8th October 2022 ~ We awoke to hear the news that yesterday's Least Bittern as expected had not survived the night, a sad end to an epic journey! ~ Today was by far the best day of the week weatherwise, with a light breeze, sunny skies and just the occasional heavy downpour.

After a late breakfast, we decided to head over to Gott, just 4 miles west of Lerwick to see if we could catch up with a Turtle Dove which had been reported a few times feeding around gardens near the burn to Strand Loch.  We eventually found the bird while sitting and enjoying a coffee on a bench overlooking the loch. It was asleep for most of the time during our stay likely fully fed from the feeders in a garden just along the burn. After Gott a short drive over to Loch of Tingwell where we connected with a female Greater Scaup.
The last time Dazza had seen a Yellow-rumped Warbler was when we'd lived in Canada for a short while and so with the excellent weather and the Myrtle Warbler still in situ at Bigton we headed over for a look. Now, this is our kind of 'Twitch', with just a handful of birders on site (most having 'ticked' the bird the previous few days and moved on) the bird showed beautifully a number of times during our stay in bright sunlight.

After Bigton and our packed lunch, we headed south to Scatness, which had turned into one of Dazza's favourite walks during our first visit to Shetland last year. A short drive around Vikrie before Scatness produced the same five Brent Geese we'd observed on Thursday along with Sanderling, Bar-tailed Godwit, Ringed-Plover, Curlew and Dunlin.

Plenty of Twite at Scatness along with Skylarks, Meadow Pipits and a few Snipe which we accidentally flushed while walking. On the lower pools six Whooper Swans a large flock of Wigeon, smaller groups of Teal and a couple of skeins of Pink-footed Geese overhead, plus a single Barnacle Goose, which circled a number of times likely looking for his mates. It was a particularly quiet walk birding-wise but nevertheless very enjoyable.
A stop at Hoswick on our way back north for a walk around the shoreline and local gardens produced a Siberian Chiffchaff and surprise Tree Pipit.
Our final birds from an excellent day were literally just a few hundred yards from our accommodation when Dazza suddenly spotted three Red Grouse in a field just off the road. A quick about-turn and the above image was thanks to Dazza's great spotting skills.

A Few More Images of the Myrtle Warbler... 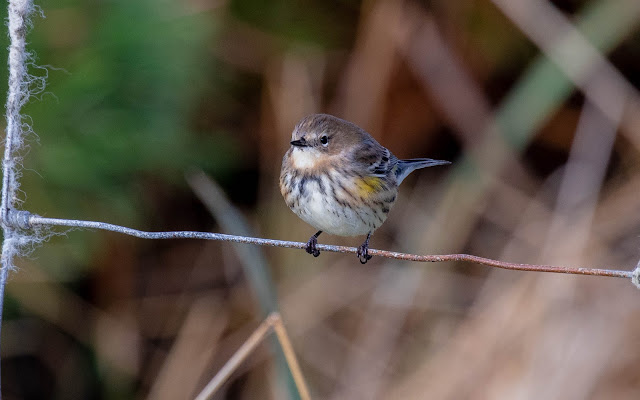 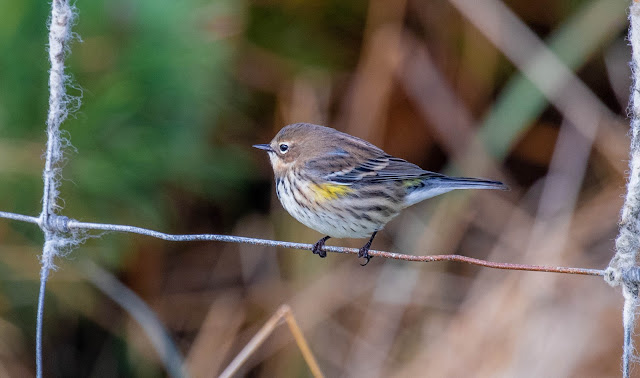 🌧10C Sunday 9th October 2022 ~ The forecast for today wasn't looking great and we enjoyed a late breakfast before news broke of a White's Thrush at Lerwick. Fortunately, the sighting was just a 5-minute drive from our accommodation and we arrived to find a number of birders scanning the treeline which overlooks Clickimin Loch. Some with thermal imagers were on the ground scanning the canopy floor for signs of movement but only coming up with Blackbirds and Redwings. From the look of the skies, we didn't have long before the heavy rain and strong wind arrived but after a half hour of scanning the bird suddenly took flight. I spotted it immediately, the tail quite distinctive in flight. It landed a short distance along a nearby burn and by the time everyone had relocated to its new position the bird flew straight back, disappearing into the trees once more and by now the rain had arrived.
🌦11C Monday 10th October 2022 ~ Our flight home today and thankfully yesterday's brief views of the White's Thrush were replaced by excellent views of the bird feeding in the grounds of Anderson High School car park in the early afternoon. A great bird and another lifer to end the week!
Posted by boatbirder at 12:50