Despite the thick fog during the drive out to the reserve, I arrived around 9:30am to a beautiful mild autumnal morning. A quick coffee while watching the large Tree Sparrow population which resides here before heading around to Starnafin Pools. It was a large group today so we split into two but I tended to wander off on my own, checking in occasional with the others.

As per usual at this time of year, it's wonderful to see the 1000s of Pink-footed Geese and 100s of Whooper Swans that winter here and in among the many Pinkies three Barnacle Geese stood out. One of the highlights of the day was watching huge flocks of Golden Plover which were regularly airborne twisting and turning in the sunlight, likely put up on most occasions by two marauding Buzzards.
Starnafin Pools held a large number of Dunlin, along with Golden Plover, (4) Black-tailed Godwits,  Little Egret and plenty of Snipe feeding around the margins. Lots of wildfowl too with large groups of Wigeon, along with Shoveler and Teal. A walk to the Dunbar Hide produced a pair of Stonechat, a nice flock of Linnet, with Yellowhammer and a good number of Reed Buntings. Only one common migrant of note today, a female Blackcap feeding on Elder.
I stayed until lunchtime before ending my day at Rattray were a very confiding Black Redstart was happy to pose for photos. As the sea haar rolled in I headed for home. 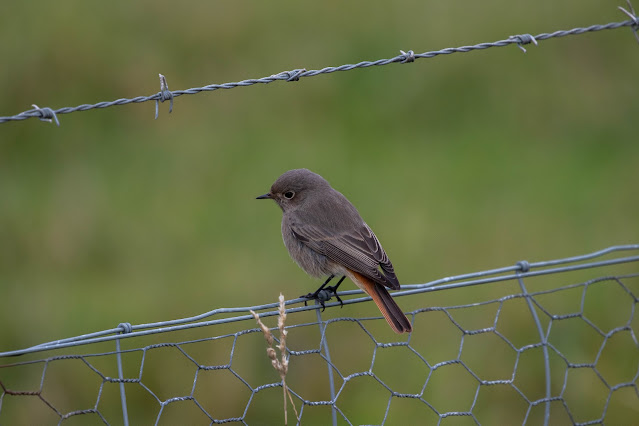