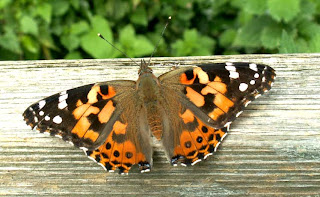 After my exploits in Canada over the previous 3 weeks life returned to some normality this week with a couple of visits to Brandon Marsh. I arrived on Tuesday to a depleted 'Tuesday Crew' with only myself and TJ in attendance, colds and holidays the main reason for lack of bodies.
Amazing how things have moved on in such a short time with the beautiful bluebells of New Hare Covert now completely spent and the tree canopies now fully in bloom. Nice to see our nesting Lapwings, Little Ringed Plover and Oystercatcher on East Marsh had all hatched successfully and so too had the Great Spotted Woodpecker in New Hare Covert, which were drawing a great deal of attention as both male and female were constantly attending their young.
All the other usual suspects were on view including a pair of Great Crested Grebe, which I was delighted to observe carrying a lone chick on the females back. My birds of the day during my short visit were Hobby and a single Red Kite over Carlton Pool at around 8.45am.
While spending the day aboard Quidditch on Friday, news came through in the late afternoon of a Woodchat Shrike which had been located on Newlands from the Carlton Hide, so I ventured down for a look on Saturday morning.
Arriving around 8.30am I intended to go directly to the the Carlton Hide in search of our rare visitor and it was no surprise that the public car park was almost full! I thought I'd pop my head into the Main Hide as I passed by and found TJ and PB, accompanied by the his lovely wife, scanning the pool. I knew immediately that with these guys sitting here there was no sign of our visitor at Carlton. Sure enough it appeared that our visitor had apparently moved on, as not a single report was forthcoming. Not to be put off I decided to see for myself and spent a good 45 minutes up at Carlton in search and you guessed it, without any joy! Good views of a pair of Cuckoo in the big dead tree though.
Notwithstanding I had a good visit with some outstanding weather and was unfortunate to miss a Spotted Flycatcher at Carlton, which arrived about 15 minutes after I'd left, another one that will go down in the 'Oh Bugger' list. I did however manage a Hobby a short time later and another interesting aspect of my visit was the extraordinary amount of Painted Lady butterflies (pictured) coming through in a breezy easterly wind. Just prior to leaving I also picked up on a Holly Blue, a beautiful tiny little butterfly which immediately caught the eye.
As this is my first summer at Brandon everything Damselfly & Dragonfly is new to me and my first attempt at identification was that of a Banded demoiselle duly helped by the able bodied TJ.
Posted by boatbirder at 21:24