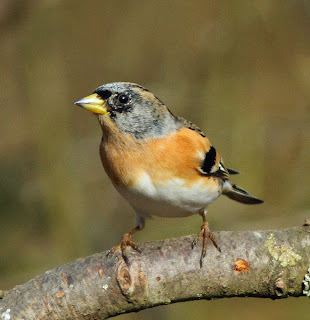 A bitterly cold visit to Brandon today but a nice bird count nonetheless and a breakfast surprise!

Having arrived just before first light my first notable of the day was a Barn Owl which entered the box near the Lafarge Works, just visible in the darkness. As I continued along the path towards Sheepfield, with others from the 'Sunday Club', a Woodcock flew over the top, a bird which seems to be getting more regularly seen on the reserve.

Passing Newlands Reedbed a short while later a second Barn Owl of the day flew East and dropped in near the outermost box. A visit to the Wright Hide and East Marsh Pool produced a single Barnacle Goose, 2 Wigeon, male and female Goldeneye, a half dozen Pochard and an eventual count of 10 Snipe, which were all on Wigeon Bank.

After Carlton Hide, where our earlier Barn Owl had left the outer box to quarter the reed bed for a daylight hunt, we paid a brief and fruitless visit to West Marsh before a Full-English breakfast in the Nature Centre. While tucking into said breakfast, this time accompanied by the wife and others from the Conservation Team, a breakfast surprise on the Nature Centre feeders as a lone Brambling appeared, only my second sighting at Brandon this year. This was indeed birding in comfort as further observations over a second Latte produced Great Spotted Woodpecker, Nuthatch and Coal Tit.

After breakfast a final walk across the 'Tip' area of the reserve produced Green Woodpecker, Redpoll, Bullfinch, Fieldfare and Redwing, now taken to foraging in the undergrowth for wind-fall as the berry yield has almost expired.
Posted by boatbirder at 18:16