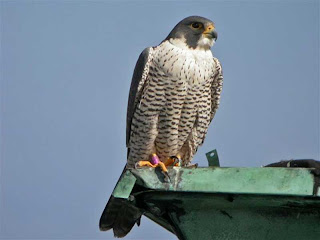 A little breather from blogging over the past 10 days due to other commitments, but I'm back with a spectacular site at Brandon today!

Firstly though I can report another personal siting of Bittern from the West Marsh Hide last Sunday 6th, the first I think I've actually seen on the West side. Also of note and well worth a mention were 2 Otters seen by one of our other Conservation Team members from the same hide last Thursday 3rd, a very rare site and excellent news for the reserve.

Back to today's excitement in the form of a Peregrine Falcon (library Picture). I've seen Peregrine on many occasions but today's was only the 3rd I've recorded at Brandon. However, I'd never seen one take prey until today. As I prepared to take the track across Newlands Reedbed towards today's works location I glanced across East Marsh Pool and noticed everything up and in flight. That normally means one thing and I immediately began my search for the reason, more often than not a Sparrowhawk. Today was an exception and as I watched the 100 or so Lapwing rising ever higher and higher my attention was drawn to the Rapter circling the flock. Just as I located what I immediately recognised as a Peregrine the bird swooped with astonishing speed smashing straight into a Lapwing, feathers flying everywhere. Within seconds the bird had it's prey under control and headed East across the marsh for breakfast, one the most spectacular sites I've encountered thus far at Brandon.

After today's high I must end my post with the sad news regarding the death of one of Brandon's own, Ted Jury at the age of 70. Ted was one of the founder members of the Brandon Marsh Voluntary Conservation Team in 1985, and since 1992 was one of the editors of the Brandon Marsh annual report. I met Ted almost a year ago when first joining the team and spent many hours in the hides at Brandon enjoying his company. I will miss him greatly, god bless Ted.