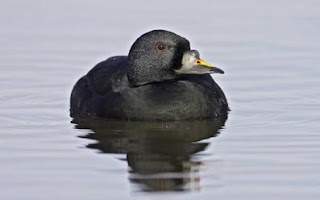 Being the dutiful husband on Valentines Day I allowed the wife to cook me a couple of bacon sandwiches this morning before dragging her around the nearby Draycote Water, a five mile hike! To be honest this was more of a pleasant walk with the wife rather than a full blown birding trip, so I only took my binoculars and left the scope at home.
Draycote as you would imagine on a Sunday had the usual cyclists, joggers and family days out, plus the many small sailing boats were out in force and so I didn't expect much on the birding side. The usual excellent numbers of Gulls were on show but it would have been too much to stop for long to scan and pick the bones out of them, especially with only binoculars, and of course my significant other.
Good numbers of Goldeneye, Wigeon, Great Crested & Little Grebe, Pied Wagtail and around 12 Goosander would have been sufficient for me today, but as we walked along Draycote Bank we got sight of a lone Great Norther Diver. I'd seen 3 on my last visit to Draycote in the Spring, but this was my first of 2010.
Now, here's where it gets even more interesting!! As I was enjoying good views of the Great Northern 3 black images swam past in my field of view just a little further out! To my delight, and after watching these birds for a good 10 minutes, I'm positive I was viewing 3 Common Scoter. Oh for my scope!!
(Library picture above of - Common Scoter)
Posted by boatbirder at 18:13