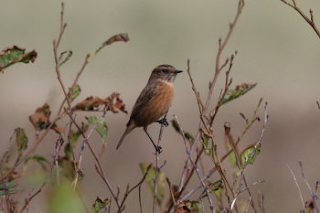 You know when you wake up at 5.45am and the rain is battering down on the roof and you just simply turn over and go back to sleep!

I finally left the boat, having slackened my mooring ropes, at 8am with the rain now light and bearable. On the flooded path down to the car park I was delighted to hear a Skylark singing high up and as I reached my car a Yellowhammer was also in full song at the top of an Alder.

I arrived at Brandon Marsh this morning at around 8.30am and made my way straight down the East Marsh path, where 2 Cettis Warbler were calling, to the big hide. The River Avon is slowly progressing into flood and so as you would imagine River Pool is inaccessible and Teal Pool is on the brink of over flow. It turns out though that my timing was impeccable. About 15 minutes after my arrival a single Bittern emerged from the left reeds and walked slowly across the whole span of open ground in front of the hide, disappearing into the right hand reed bed a short time later, probably my best ever view of a Bittern!

With the Bittern sighting in the bag and the rain now history a walk around the reserve was next on the agenda. New Hare Covert produced a Goldcrest in one of the Scots Pine, my second of the year, and after a walk through Horstail Glade, where a Nuthatch was calling, we headed across the Tip area. The walk around Farm Field back to the Nature Centre produced Kestrel, Common Buzzard and around 15 Chaffinch in a small flock. After a bacon sandwich in the tearoom and a catch up on species of the day other notables on East Marsh were, 1 Water Rail in the gap, 1 Sparrowhawk which sent everything skyward, 2 Shelduck and **2 Oystercatcher, which were seen before I arrived, but I did have them myself on Tuesday.

The final string to the bow for the day was a female Stonechat (pictured) which was siting patiently on the bramble on Top Reed Bed as myself and JR returned to our cars in the main car park, only my 3rd sighting on the reserve.

**3 Oystercatchers were reported on site on Wednesday!
Posted by boatbirder at 13:45