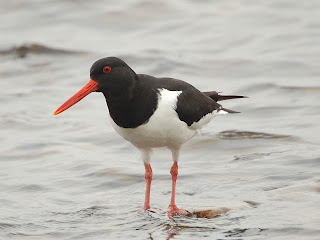 As I'm compiling this post in beautiful sunshine and a crystal clear blue sky I'm briefly interrupted as I spot 12 Golden Plover over flying the boat, their lovely golden colouring sparkling in the sunshine.

A completely different story to the past week were it seemed that every time I went out into the field the heavens opened and soaked me to the bone!

I suppose the best day of the week was Tuesday when we managed to shift around 3 tons of sand across to the Sand Martin structure in preparation for the forthcoming season. Nothing really of note to report at Brandon though on the birding front.

Wednesdays planned visit to Draycote Water with other members of the Conservation Team turned out to be a complete washout. We began at 8am prompt in the early morning fog, which did eventually lift, only to be followed a short time later by torrential rain. Bird of the day turned out to be a single female Goosander, not the best day I've ever had at the water. It appears though that one of the team had a good end to the day as driving home through the village of Granborough he came across the recently showing Great Grey Shrike, just sitting in the tree he tells me as he passed the footpath gate in his car! A final note on Draycote interestingly enough is that it appears I wasn't the only individual to locate 3 Common Scoter there last Sunday according to the Draycote sightings list.

Thursday at Brandon started off with promise with one of the Bitterns showing well in front of the East Marsh Hide early on, followed quickly by a Water Rail. Also showing on East Marsh Pool were 4 Shelduck, 7 Snipe, a female Goosander and a lone Barnacle Goose. However, the arrival of the first Oystercatcher (pictured) of the year was a good sight to behold, Spring it appears is approaching fast. Unfortunately the day ended in a complete whiteout, as around another 3 inches of snow was dumped on us once again and all hopes of spring disappeared!! In fact as I rap up this post it seems more snow is forecast to hit overnight.
Posted by boatbirder at 15:47