Out and about early this morning, firstly on Napton Hill and then on to Brandon Marsh. Napton's visit was a windy affair with a strong south-westerly coming in, followed shortly after my arrival by nasty heavy drizzle, it was also feeling quite humid too.
Napton produced at least 200 mixed Swallow and House Martin, brought down I suspect by the low cloud, and good numbers too of Willow Warbler and Chiffchaff in and around the church yard feeding on the Elder and Blackberries, a lone Goldcrest was amongst them. Other notables seen during my short visit were Bullfinch, Nuthatch and Treecreeper, no sign today of Raven or Spotted Flycatcher but the weather was not helping and so I cut short my stay.

My trip to Brandon was not uneventful as when coming through Birdingbury I ended up with a nearside rear puncture, I arrived some 45-minutes later, not in the best of moods. Brandon remains reasonably quiet and I personally missed 2 Ruff by seconds which arrived briefly on East Marsh Pool last Tuesday, I also noticed 3 in the book for Monday, strange I missed these too as I was there for several hours myself. As with Napton Swallows and House Martins were plentiful, plus the addition of Sand Martin and 5 Swift, now well into their Autumn migration, were also noted. On the pools the only other species of note were 3 Snipe with Teal and Shoveler numbers continuing to build, around 300 Lapwing too. The best of the day was my first Marsh Tit at Brandon, when Jim Rushforth and I picked one up amongst a flock of tits in New Hare Covert, quite a rare visitor with only 3 records this year. 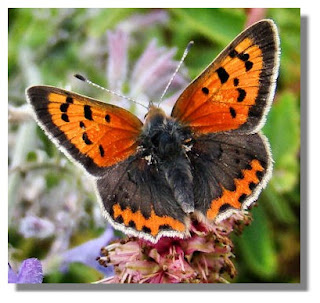 It's bed early for me tonight with a flight at 6am tomorrow morning for a 4 day birding break in France which I'm really looking forward to.
Posted by boatbirder at 17:10