The Brenne is a patchwork of fishponds, heaths and red sandstone outcrops. Looking very natural, it's landscape has however been transformed by man, as early as the Middle Ages. Today with more than 2000 man made lakes, traditionally used for farm-fishing, the Brenne is of international importance for it's rich wildlife. The area has many hides and natural trails all waiting to be explored.

This was our second visit to the area but arriving in late August we weren't expecting the cacophony of noise that we experienced last year in early June, with the colonies of nesting Black-headed Gulls, Whiskered and Black Terns now mostly departed. With such a big area to explore we decided to re-visit the specific locations we'd discovered last year, and in particular the Reserve Naturelle de Cherine.


Our first stop was a raised hide at Etang (man-made lake) De La Gabriere which affords good views of the lake and surrounding reed bed. European Pond Tortoise are quite common to this area and a number were basking in the warm sunshine on  the raised logs quite close to the hide. A Kingfisher arrived much to the delight of the photographers ( "le magnifique"), it was like a french version of the Carlton Hide at Brandon! We spent around another 15-minutes and had good views of Great White Egret, Sedge Warbler, a few lingering Black and Whiskered Terns plus Black-necked Grebe. On the small scrape to the left of the hide were 5 Black-tailed Godwit, several White Wagtail and 2 Wheatear. 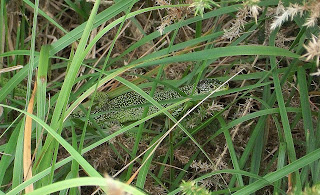 Walking down many tracks Dee spent most of her time chasing various Butterflies camera in hand, and when something moved within the undergrowth she was there instantly, patiently waiting for whatever disturbed it. We have some excellent record shots of Butterfly which include Silver-Washed Fritillary, Short-Tailed Blue and Grizzled Skipper, plus a number of which have yet to be identified. We also have an excellent record of a lizard as yet unknown, see if you can spot him pictured above.
We arrived at our second destination at Etang Du Gabriere and the walk down to the hide produced Stonechat, Wheatear, Corn Bunting, at least a dozen Yellow Wagtail and a single Black Kite overhead. Just prior to entering the hide there is an excellent area to view the hundreds of Common Green Frogs which sit quite happily in the mud. Last year the Gulls and Terns were in full voice, but today was a peaceful visit with most nesting birds recently departed. On show were all three Egrets, Great, Little and Cattle, which were in constant contact with the grazing cows. Swallow were in great numbers merrily skimming the water and we managed 2 Red-rumped amongst them, House Martins were less prolific but in decent numbers. Swift were not in great numbers but we did manage several.


On the lake were eclipse Garganey, Gadwall, Tufted Duck, plus a few Pochard and Teal were also present along with with Grey and Purple Heron, good numbers of Great Crested Grebe too. Also recorded of note during our stay were Green Sandpiper, Spotted Redshank, Snipe, Redstart, Cetti's Warbler, and Cirl Bunting. In other areas of our short trip to France we managed, Short-toed Treecreeper, Tree Pipit, Goldcrest and Honey Buzzard, which are widespread in Brenne and seen frequently.
Back in the UK today with a bump, spent the whole morning with the Conservation Team at Brandon Marsh cutting the summer growth vegetation off the Islands and Banks. Hopefully now when the rarities drop in we'll once again be able to see them!
Posted by boatbirder at 18:53