⛅21C Friday 4th August 2017 ~ A visit to Brandon Marsh, managing to avoid the showers during the duration of my stay!

Sadly this post will deal mostly with the negatives of Brandon Marsh, which if I was making a list seems to be growing by the day! I visit the reserve regularly as my reader will know, birding mostly but in the summer months seeking out butterflies, Odonata and other amazing flora and fauna that can be found in the reserves diverse habitat.

I've also been volunteering at Brandon Marsh for over 10 years now, and yes in recent times less so, but my commitment to the site and passion for its wildlife remains. Sadly over many months now I've seen first hand a major change taking place. It would seem to me that the owners of the site, 'Warwickshire Wildlife Trust' have completely lost sight of what an SSSI (site of special scientific interest) actually stands for! Sites of special scientific interest ( SSSIs ) are protected by law to conserve their wildlife or geology. I see nothing in the trusts recent initiatives that identify the desire to conserve the reserve's wildlife or geology! What I do see is the increasing desire to promote activities throughout the whole reserve which to my mind is only having a distinct impact on the site's wildlife and its habitat. 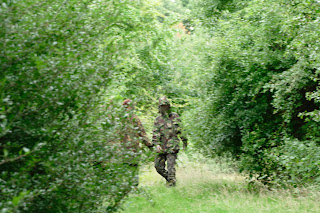 For me today was simply the straw that broke the camels back! While completing my usual walk around the 'Tip' area, River Meadow and the Farm Field, an excellent area for butterflies, Odonata and bugs my attention was drawn to a noisy group of youngsters. The youngsters, who I am not blaming first hand for the disruption, were crashing through and trampling the long grass and encroaching into the woodland (unsupervised at this point) in an attempt, as I later found out, to hide from members of the trusts education team in what can only be described as a kind of children's war games! Indeed as I continued my walk a second group, faces blacked and dressed in combat gear were also encountered. In an incident a few months ago a similar group, dressed in combat gear came crashing into East Marsh and Teal Pool hides after noisily running up the central marsh path. What possible educational value (wildlife related) this has for the youngsters I'm at a loss to understand. 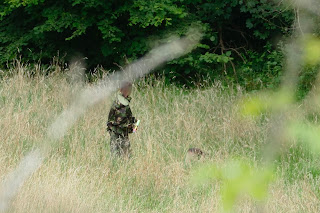 The areas in question also contain Barn Owl boxes, Tawny Owl boxes and general nesting boxes. More recently I have personally moved family groups picnicking on an area which contained several Bee Orchids, prevented people from walking their dogs (off lead) and in one case stopped a full blown (jumpers for goalposts football game) taking place! In another incident a Pyramidal Orchid, the only example on the reserve was dug up! 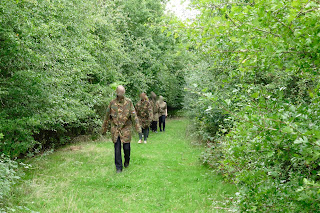 The reserve has no designated ranger/warden and it's left for a few members of the Brandon Marsh Voluntary Conservation Team to actually police the reserve as and when they visit. I've no doubt that the education team at Brandon do an excellent job with schoolchildren and other groups in developing and encouraging future Chris Packham's but surely a decision needs to be made by the management of the trust: Is Brandon becoming a Country Park: An area designated for people to visit and roam unchecked, while enjoying recreational activities in a countryside environment or will it fulfil it's commitment to policing and maintaining a Site of special scientific interest for the benefit of its wildlife?

This is what Brandon Marsh is really about!