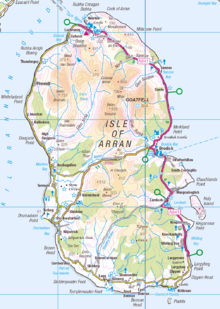 With Dazza on business up in Scotland this weekend I thought the least I could do was to chauffeur her there in comfort! Of course, she was fully aware of my ulterior motive, which was to take the ferry across to the Isle of Arran for a few days of Nature Watching.

Having driven the six hours up, almost painlessly, on Friday afternoon with an overnight stay in Adrossan the plan was for me to take the first ferry across Saturday morning.

Unfortunately, my best-laid plans didn't get off to the greatest of starts when I received a text on Friday evening informing me that the ferry would be passenger only due to technical issues, apparently, a crane had damaged the ramps on the MV Caledonian Isles. However, with a quick phone call from my travel agent (Dazza) I was thankfully rebooked for the next available ferry, MV Isle of Arran, a few hours later

The crossing takes around 55 minutes and is, of course, a perfect opportunity for a mini Pelagic. The conditions were good for the crossing with a slight swell and the odd squally shower passing through. By the time I docked at Brodick the weekend list had gotten off to a good start with of note: Black Guillemot, Guillemot, Kittiwake, Fulmar, Gannet, Red-breasted Merganser, Great Northern Diver, Shag.

Just 20 miles long and 10 miles wide, the island has earned it's somewhat cliched title, "Scotland in miniature", thanks to the dramatic granite peaks in the north and lush, low-lying terrain to the south, and it boasts miles of sweeping moorland, wooded glens, wide sandy beaches and impressive waterfalls. The Squirrels are Red, not Grey and Arran has a healthy population.

With the coast road, literally covering the whole of the Island, stops were inevitably every 5 minutes or so to scan the many beaches, rocks and channels. Off shore, many Gannets could be seen constantly diving around fish shoals and the odd small group of Eiders would feed alongside the many Guillimont. Occasionally I'd come across a Red-throated Diver, still almost in full summer plumage.

Several times while scanning the dorsal fin of a number of Harbour Porpoise would rise above the water as they take in air, Harbour Seals are also plentiful and can found in abundance. At one time some great views of a Sea Otter, which stayed around just long enough for a few photos.

Around the rocks I don't think I've ever come across so many Rock Pipits, mainly feeding on the seaweed, along with equal numbers of Pied Wagtails, the occasional Grey Wagtail within. Waders were thin on the ground with the only four species recorded: Oystercatcher, Curlew, Redshank and Ringed Plover.

I simply didn't have the time during my brief stay to do much walking, a must really if you want to see this fantastic Island in detail. However, a drive inland on both days along the only road which crosses the Island produced Stonechat, Spotted Flycatcher, Red Deer high on the slopes, two Golden Eagle over towards Goatfell, the Islands highest mountain but sadly no Hen Harriers, although Common Buzzards seemed plentiful.

A great adventure on the sailing back Sunday evening when once again, more technical issues caused havoc! This time MV The Isle Of Arran was unable to leave Adrossan having docked leaving my boat MV Caledonian, on route back to Ardrossan with nowhere to dock. After being offloaded back at Arran and the risk of cancellation, not to mention an imminent gale, it was eventually decided they could get in at Gourock, some 2 1/2 hours sailing north and 40+ miles further up the coast. It actually took 3 hours but provided some great Pelagic birding, the highlights being many Manx Shearwater and a couple of stunning Sabine's Gulls as the light faded! Quite a rarity along these waters according to another local birder.